The appearance is of a 10" steak sandwich, served open faced with strings of fried onions laced throughout the finely chopped meat. I would've liked a bit more meat piled in (I like my steak sandwich overflowing) but it's otherwise what I expected. The cheese seems hidden, as they did the "pile steak on grille, top with cheese, top with roll" technique. The interesting part is that Michael's seems to give the interior of the roll a light toasting but they leave the exterior alone. - 2 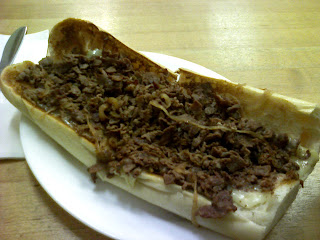 The roll is a soft steak roll with a glazed top and some scattered cornmeal on the soft bottom. Again, only the interior of the roll has been slightly toasted, which I was skeptical about at first. Normally, I like a soft interior on the roll, as it soaks up the oils from the steak and onions, along with the melted cheese. Being that it was a slight toast, it brings a different texture to the eating experience. While the oils, and juices ran past the hard, toasted interior bread, it ran into the inside of the roll, which acted like a sponge soaking up the goodness from the inside first. - 3.5

The meat was of a decent quality...probably a sirloin cut which was cut into thin sheets before being chopped finely on the grille. For the most part, the meat was still soft, and juicy. A mild amount of spicing with infused fried onion juices being tasted throughout the meat. There were a few overdone pieces in the bunch. I would've liked a bit more meat, though. It was just a tad skimpy when I folded the sandwich over. I really didn't need the fork at all to collect any fallen remnants. Definitly, only a 1 handed effort when eating this one. - 2.5

The cheese was American (as ordered). I prefer when the cheese is melted throughout the steak. This particular version had the cheese between the steak and the roll. They used a decent amount but it gets a bit lost when it's clinging to the bread instead of the actual meat. - 2

Overall, the steak sandwich was decent. I would order it again. I liked the interior toasting of the roll, as it gave the sandwich a mild crunch when biting into it. I probably prefer it untoasted but if that's the way they do it, I'll take it. The thin onion strands were also good. I'm used to getting the small 1/4" - 1/2" onion slices but these onions seemed to mix in well with stringy caramelization running around the meat. That cheese issue is a slight downer but it could've been worse. The good news is that they put a good amount on the sandwich. The bad news is that they just didn't put it where I like it. - 2.5