The appearance is of 12" from a long roll, which has been cut in half. The underside has sprinklings of cornmeal and semolina. The finely chopped steak is intertwined with small bits of fried onions and cheese. Most of the ch 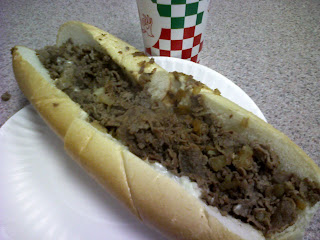 eese is stuck to the one side of the bread but the other side of the roll actually has the American cheese mixed between the meat and onions. The coverage is decent...a little light towards the end of the roll but not bad serving by any means. - 4

The roll is from D'Ambrosio Bakery (http://www.dambrosiobakery.com/index.htm) in Philadelphia. It's soft on the inside with a thin skin of crispy outer shell that is really nice. It's sturdy enough to hold in all the oils and juices from the steak and onions. The bread doesn't fall apart at any point. In fact, the roll was appealing enough to gobble even the portions that hadn't been touched by the steak. - 4.5

The meat is a thin cut, chopped up portion of what appears to be round. It's seasoned with salt, pepper, and a hefty portion of oil. The steak retains enough moisture and juiciness to allow for an easy chew. There could've been a tad more towards the end of the roll but I was satisfied with the overall amount that I received, along with the quality of the meat. - 4

The cheese is stuck to the interior of the roll on one half of the roll, while the other half is mixed throughout the meat. - 3

Overall, this is a nice sandwich. It got some attention this past year, as the "Super" was featured as Philadelphia Magazine's 2008 Best Cheesesteak in King of Prussia. (http://www.phillymag.com/best_of/detail/best_of_philly_2008_cheesesteak_king_of_prussia/) While I opted for the plain cheesesteak for the sake of comparison, the Super sounds like it's worth a shot in the near future. - 4

As a side note...Angelo's has crushed ice for their soda! It may not sound like much but many people search far and wide for places that serve crushed ice in their cups.