The appearance is of a 10" steak sandwich with thinly cut strips of ribeye. Man, talk about skimping...I think if I were to actually flatten out each piece of steak and stretch them out against the roll, it wouldn't be enough to cover the bread. A few pieces of fried onions are scattered in between the meat, rolls, and unmelted cheese resting against the roll. - 1.5 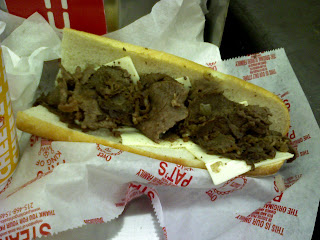 The roll is probably the best thing going on with this sandwich. It's fresh, and soft, and has just enough texture on the outside to give way to the bready, spongy center. The soy oil and caramelized sugars from the onions and beef stick nicely to the interior of the bread. - 4.5

The meat is a nice cut...ribeye is one of my favorites. The problem is that this delectable steak gets a bit overdone and gristly. Dare I say, somewhat "rubber-like?" The other bad part, as mentioned before is the actual lack of steak on the sandwich. Pile it on there, son! - 2

The cheese...just take a look at the picture. I know these guys pride themselves on being quick from order to serve(I got mine in 15 seconds from time of order) but what the hell is that? 3 slices of unmelted American Cheese just lay between the steak and the roll. Yes, yes, I know. "Ya have to get it wit da whiz, dat's why!" That's all well and fine, and I do like the whiz on my fries but I think it overpowers the sandwich and drowns out the steak. If you're not going to do it right, don't have it on the menu. It's that simple. Only serve it with whiz if that's the kind of neglect the slices of cheese get. - 1

Overall, it was sub par. I've had better steak sandwiches out in the 'burbs and this place is renowned for being the creator of the sandwich. I don't know if I just have cloudy memories from my earlier years of going here and them having the best cheesesteak I ever had, or if I finally just figured it out. This place (and their neighbors across the way) are just part of the hype machine. The fries were good but that's not what the blog is about. A little less hype and a little more respect for the food would score these guys higher. - 1.5

I think it would be too awesome if (someday) you are able to photograph a REALLY good Philly Cheesesteak that you've made, and show the difference between yours and that one you have shown on here from Pat's place! :o)

Wow.. I've never been to Pat's before (from the West Coast) but of course everyone who watches Foodie shows knows all about the big rival between the two cheesesteak joints in Philadelphia.

To actually see that photo you have (the second one where the cheese looks cold) is just... zow.. :-O ...I'll bet anything you can make one ten times better!

I thought about doing that recently. I had some thinly sliced ribeye, top round, and a small amount of filet. I did the cheese just right...I place the mix of meat, and onions in 3 even piles enough to fit on the roll. I place the cheese on the piles and let them melt. Then I grab each offering with the slotted spatula and start piling it in. Nice balance with cheese running inside the sandwich. Not like this debauchery that I received from Pat's, which was a few slices of lukewarm slivers and unmelted cheese. Pat's does have amazing rolls and I've enjoyed them in the distant past. Not so much anymore, as the poor execution makes me want to go elsewhere. They're living on reputation only at this point.

They put the cheese slices on the bread separately instead of on the grill in deference to kosher Jewish customers who can't mix meat and dairy.

I prefer the Whiz steaks at Pat's. Provolone isn't bad if you get it wrapped to go. By the time you eat it the cheese is melted.

That's the first I've heard that they did it to remain kosher. Seems like it would be easier to have a section of the grill, or a seperate pan for kosher sandwiches.
I've never been much of a fan of whiz on the sandwich. It overtakes the flavor. I'm not really partial to provolone on a steak sandwich. I love it on just about everything else but American is my choice(and my baseline for rating). With all that being said, The "King of Steaks" can't compete with many, many other establishments that have figured out how to nicely melt cheese on the steak.