Appearance is of a 12" roll that is stuffed and overflowing...just the way I like it! In fact, they pile in so much steak, they give you a fork without having to even ask for it! Plenty of chopped, sauteed onions cover the top. - 4.5 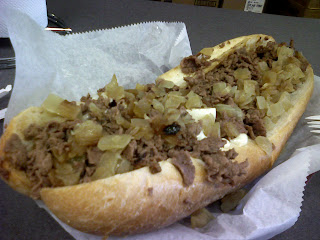 ll from Conshohocken Italian Bakery (http://www.conshybakery.com/). It's got a dense enough texture on the inside to to soak up the oils from the onion and steak mix. The exterior of the bread is soft when you grab it but it works out great when you push the meat down into the bread. It actually expands around the bread while retaining it's semi-soft texture on the outside. It stands up to the sogginess factor and doesn't fall apart at any point. Your teeth really sink into this bread before you reach the meat - 4

The meat is a thinly cut steak from Altieri & Sons in Norristown. They cook it just enough till it's not pink anymore. I chewed some without the bread and it was moist, tender, and juicy. The steak is lightly seasoned but it doesn't seem to need much because it's got enough flavor jumping out on it's own. Delicious! - 4.5

The cheese is melted throughout the steak with the exception of a corner of one slice, which was only partly melted...yet by the time I got to it, it was well melted into the meat. It could've been a bit more apparent but not bad. - 3.5

Overall, this is the place to seek out when you're in the Plymouth/Blue Bell Area. They are legendary for the mix of Altieri meat and Conshy rolls. The only questionable aspect that could've made this better was the cheese, which could've had a bit more and could've been melted a tad more. - 4.5