The appearance is of a 12" torpedo roll that doesn't want to yield to being placed opened up on the counter. These guys aren't kidding with the cheese, huh? It's an all out assault and take-no-prisoners approach by virtually drenching the inside of the bread and covering the steak. Scattered bits of fried onions, and lightly browned steak peaks through the American cheese meltdown. The bread isn't really crusty on top. It's got a light glaze but is soft to the touch. The bottom is very soft with some corn meal traces sticking to the creases. A bit sloppy but damn appetizing. - 4 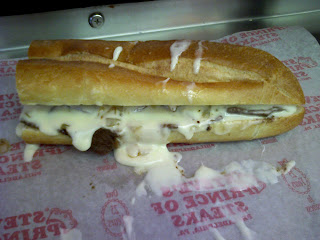 The roll is a soft roll that gives way when you grab it. It is highly absorbent, as it gathers in all the goodness from the steak. The downfall is that the roll starts to fall apart once you get 3/4 of the way finished. A little more of a stable roll would've worked better but these guys have their own thing going where they want you to be able to wrap your hands into this thing. Not a bad roll but not the best I've had, either. - 3

The meat is piled in the sandwich as medium slices of eye round roast. I normally go for the chopped and diced steak, as I feel it works better for the integration of the onions, and cheese to work through the steak. These guys defy my bias because they put enough meat, onions, and cheese for you to get some goodness in every chomp. The flavoring of the beef is well done. Mildly seasoned with a gentle bit of saltiness. The real treat is from the texture of the beef. Your teeth sink through the tender beef cuts with no problem. This is by no means, overcooked. If anything, it seems to be cooked perfectly to my liking. It retains a nice tender, chewy softness that you would expect from a thinly cut porterhouse that's been seared. - 5

The cheese is like liquid magma flowing from the interior of the roll. They have a nice system of melting the cheese separately (perhaps in a double boiler?) and ladling this molten dairy compliment inside the sandwich. They could have toned it down a touch but if that's the way they do it, I'll take it. I didn't attempt to remove any, so I suppose that's a good thing. It didn't hinder the onions, or steak either, so there's no problem there. I suspect that this may have contributed to the degeneration of the roll though. - 4

Overall, I was a fan of the sandwich. Like I said, the roll was the weakest link with this experience but it wasn't too bad with all things considered. The real winner, here, is the meat, which proves that good steak sandwiches can be done without the chopped & shredded steak. - 4.5

I was here yesterday with 4 of my buds and we enjoyed the hell out of the food! A+