The appearance is of 12" steak roll with medium pieces of chopped steak and onions. The amount looks good with enough steak jammed into the roll. -4 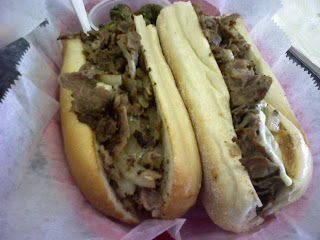 The roll...I tried to see if there was a bakery name on the delivery box but I didn't see any printing. Whatever they are, they are on par with the Conshy rolls that the other steak shops have been using. It's soft with a semi-firm outer crust that gives to the touch. It holds up to the steak, juices, and cheese. - 4

The meat is chopped into small, and medium pieces. It's mildly seasoned but perhaps not seasoned quite enough. While there are some tender pieces, there are also pieces that are a tad overcooked. I've had this sandwich before and I thought it was cooked perfectly. This outing faired differently and the the score will hold until I get different results a few times in a row. - 2.5

Overall, this is a decent sandwich. Like I said, I may have caught them on an off day but if I were an out of towner, I would've thought this was slightly better than average. Inconsistent pieces of cooked meat lead to the slight downfall of this steak. The good outweighed the bad but not by a longshot. The roll, and cheese seemed to hold this one together. - 3 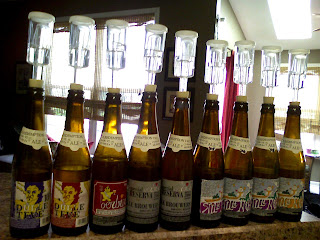 In hopes of recreating De Dolle's Stille Nacht Reserva on a 3 gallon level...

Below, the Teve had some foam from shaking the bottle a bit before taking the picture. The Teve Reserva had a tiny pellicle formation from the brettanomyces and bacteria cultures. 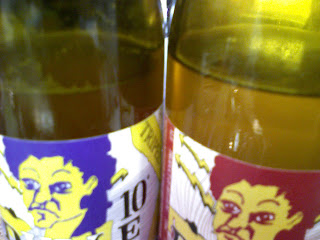 While the Oerbier had the most potent, and active fermentation among the 9 bottles, the Oerbier Reservas developed a thick pellicle atop their liquid surface. 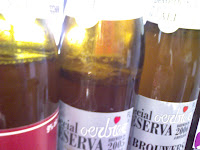 The Stille Nacht '08 kicked off quicker than any of the Stille Nacht bottles but the '06 soon found some life in the bottles, as did the '05, albeit only a little bit and certainly a late bloomer. 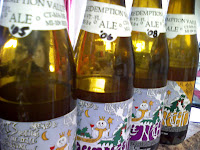 Below, you can see a pellicle development atop the Stille Nacht Reserva bottle. 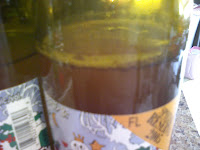 I made a very big, sugary starter from Liquid Malt Extract, Dried Pils Malt Extract, a little bit of honey, a touch of natural apple juice, and some yeast nutrient. Big, indeed...over 1.100 OG. 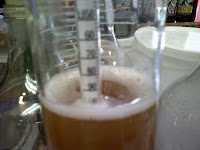 The regular(non-Reservas) went into 1 growler. The Reservas went into another. Primary fermentation will be done with the regular mix. For Secondary (aging), I will add the Reserva mix, along with 2.5 ounces of medium toasted French Oak chips that have been soaking in a Cabernet/Merlot mix since early December of 2008. Secondary will last at least 1 year before bottling. 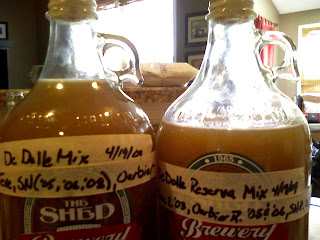 28 hours after adding the active cultures to the sugary yeast starter (nevermind my daughter watching A Bug's Life in the background)...
Posted by Mike at 8:25 PM No comments:

If there is a pizza, cheesesteak, or wing place that you would like to suggest, please let me know and I'll check it out! I've got several places in mind but suggestions are always very welcomed.

The appearance is of a Neapolitan style slice of pizza with a thin crust and a scattereing of mozzarella cheese with chunky, layered sauce on top. - 4

The crust is a superb, crispy, deeply browned bottom with a fine coating of corn meal still sticking to most parts of the crust. This pie isn't going to sag on you. It's got such an addictive crunch, you'll wonder why your homemade pies can't come out like this (wetness & fermentation of the dough, along with high heat). This crust is up there with the best of them and people that know and understand pizza seek this particular pie out. - 5

The sauce is very good, IMO. Charlie's uses a highly regarded canned product for their sauce, which has been commended on foodie boards(chow.com & pizzamaking.com). They use a San Marzano plum tomato from a company called Alta Cucina. My guess is that they rinse & crush the plum tomatoes and add some paste, or actually cook off the water. Whatever they do, it's a winner. The semi-sweet sauce has a mineral, and gently salted flavor that compliments the crispy, crackly bread underneath. - 4.5

This particular version (their signature) has the cheese underneath the sauce. It's a nice mozzarella (& perhaps a touch of mild cheddar) that retains texture, and chewiness despite the high levels of heat from the oven. In a way, I think it works out better with the cheese underneath the sauce on this one. It seems to insulate the bread a bit more to create a finer crunch, and the sauce gets cooked more by being exposed to the heat. - 4

Overall, I love this pie. It's one of my favorites and it's a value at only a few bucks per slice. That crispy crust along with the cooked sauce on top of the pie makes this a pizza lover's dream. Even though Charlies doesn't have a wood-fired, or coal-fired oven, this oven is hot enough to make these as good as some of the NY style Neapolitan pies. You won't be "wow'd" by the ambiance but that's not what this place is about...nor are some of the best pizza joints in the U.S. - 4.5

Pie In The Sky (Wayne) - Cheesesteak

The appearance is of a 12" steak roll with 8 ounces of beef, onions, and cheese stuffed between the rolls and showing a small margin of the roll line. - 3.5 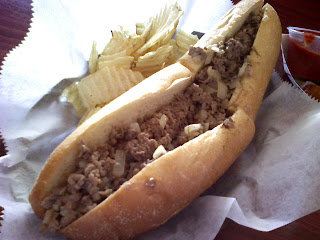 roll! I'm starting to see a trend with many local eateries using this delicious soft roll on their steak sandwiches. It's soft and it doesn't fall apart. I had a brief conversation with the gentleman behind the counter about Conshy rolls versus Amoroso rolls. We agreed that the Amoroso rolls are better for hoagies but these have the right texture for cheesesteaks b/c of their integrity. The juices stay in tact and the bread keeps the sandwich together nicely. See my posting on Pudge's for a link to Conshohocken Bakery's link. - 4

The meat is very finely chopped. Now, when I say finely, I mean it. This may be the only example I've gotten where the steak is chopped into such tiny pieces. It works because the cheese and onioins easily fall in between the scattering of juicy steak pieces. The only complaint is that it could've used just a tad more seasoning for my liking. It was only lightly seasoned and the fine cut left me wanting something a bit more with most of the good flavors being stuck on the bottom part of the roll. Other than that, it seems like it's from a decent cut of steak. - 3.5

The cheese is melted throughout the steak, covering most of the meat with a nice melt. Whatever isn't caught by the steak, runs down to the bottom of the steak roll, which holds up nicely. - 4.5

Overall, this is a really good sandwich. I remember during my youth, my friend Greg J. and I would ride our bikes into the center of Wayne and get steak sandwiches and pizza from this place. I even remember they had a video game (Rush N' Attack) and a pinball machine that I would dump quarters into. After a fine lunch, we would hit one of our many stops in town...Comic Nook, Arcade, O'Brien's News Agency, (whatever that toy shop was called - "Wayne Toy Town"...thanks Andrea!), Repo Records(original location in the house up on the hill), and the library. Eating this delicious steak brings back many of those memories. I have a feeling that even if I had never been here before, I would still enjoy this as much due to the overall package. This cheesesteak was named Philadelphia Magazine's 2008 Best of Philly, Main Line Cheese Steak. (http://www.phillymag.com/best_of/detail/best_of_philly_2008_cheesesteak_main_line)
It's one to seek out, for sure. - 4

The appearance is of a 12" steak roll served open faced with a scattering of cooked steak, well melted cheese, and chopped, cooked onions. It falls a tad short of covering the entire roll with meat. - 3

The roll is an easy one to spot. Another one from Conshohocken, which was confirmed by a server. The signature texture is unmistakable. It sponges up all the goodness of the steak, and it has a soft, glossy exterior on top with a soft, cornmeal dusted bottom. - 4 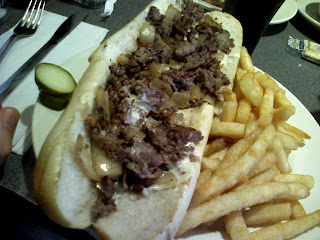 The meat is of a well chopped steak that is not only seasoned great with a wonderful oil flavor resonating, it really melts in your mouth with the tender juiciness. The flavor really can't be beat. The only downside...they call for 8 ounces (not bad) but it just doesn't seem to fill out the sandwich roll. Flavor = yes. Amount = no. We just need a bit more on there to make it top notch. - 3.5

The cheese is up there with the best of 'em. In fact, if Steve's was the bar for the melted cheese (minus the overkill abundance), this place has some of the best melted, and mixed cheese throughout the meat, cheese, and bread that I've had. - 4.5

Overall, I've always liked this sandwich. It's a bit of a hidden gem that not too many people know about. The Gateway Cafe caters to the diner loving crowd but I've had some great lunches at this place. The seasoned meat (if only there was more), well melted cheese, and Conshy roll make this a winner. - 4

Appearance is of a 12" roll that is jammed with some well cooked steak. The roll stays open due to the good looking meat stuffed inside with scattered onions, and cheese. - 4

The roll is of a nice looking steak roll with a soft texture. I'm not sure who the baker is but if I had to guess, I'd say it was Conshohocken based on the way the roll forms to the hand and doesn't fall apart. - 4 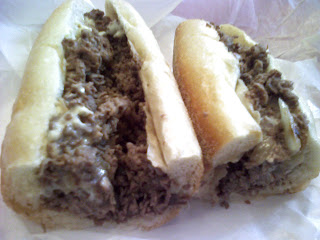 The meat is terrific. It's cooked well and there is light seasoning with mild oily juiciness retained well throughout the chopped steak. As good as it is, it's hard to measure up to the bar that's set by Pudge's with the overflowing, awesomely cooked steak. This is great but I'd take a Pudge's over this...and there seems to be some connection according to this link. http://chowhound.chow.com/topics/430752?tag=highlight-3720782;post-content-3720782#3720782
If this is the same Altieri steak that Pudge's uses, it's seasoned slightly differently and you dont get quite as much in the Conshy roll. - 4

Overall, this is a very nice sandwich, which I would order again and put into the regular rotation. Very nice flavors and is a great find for the Collegeville/Trappe area. - 4