The appearance is of a Neapolitan style slice of pizza with a thin crust and a scattereing of mozzarella cheese with chunky, layered sauce on top. - 4

The crust is a superb, 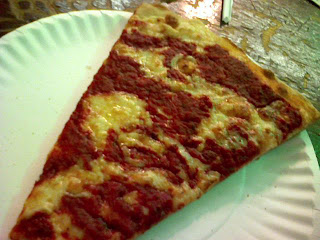 crispy, deeply browned bottom with a fine coating of corn meal still sticking to most parts of the crust. This pie isn't going to sag on you. It's got such an addictive crunch, you'll wonder why your homemade pies can't come out like this (wetness & fermentation of the dough, along with high heat). This crust is up there with the best of them and people that know and understand pizza seek this particular pie out. - 5

The sauce is very good, IMO. Charlie's uses a highly regarded canned product for their sauce, which has been commended on foodie boards(chow.com & pizzamaking.com). They use a San Marzano plum tomato from a company called Alta Cucina. My guess is that they rinse & crush the plum tomatoes and add some paste, or actually cook off the water. Whatever they do, it's a winner. The semi-sweet sauce has a mineral, and gently salted flavor that compliments the crispy, crackly bread underneath. - 4.5

This particular version (their signature) has the cheese underneath the sauce. It's a nice mozzarella (& perhaps a touch of mild cheddar) that retains texture, and chewiness despite the high levels of heat from the oven. In a way, I think it works out better with the cheese underneath the sauce on this one. It seems to insulate the bread a bit more to create a finer crunch, and the sauce gets cooked more by being exposed to the heat. - 4

Overall, I love this pie. It's one of my favorites and it's a value at only a few bucks per slice. That crispy crust along with the cooked sauce on top of the pie makes this a pizza lover's dream. Even though Charlies doesn't have a wood-fired, or coal-fired oven, this oven is hot enough to make these as good as some of the NY style Neapolitan pies. You won't be "wow'd" by the ambiance but that's not what this place is about...nor are some of the best pizza joints in the U.S. - 4.5