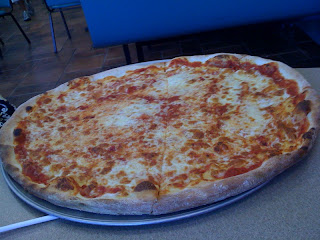 Appears a large, 20"+ pie with some dark brown, mildly charred bubbles on the top of the pie. There are also pieces of real mozzarella that are thrown on towards the end of the bake, which shows up as ghost white blotches. There are some powdery flakes towards the edge of the crust. The underside is fantastic. Nice, dark brown crispiness shows. - 4.5

Crust is great. A nice, perfectly baked pie that stands at attention when held with one hand. Just the right amount of crisp and crackle that make this pizza a sure fire winner. The amazing part is that the dough wasn't a very hydrated one. I watched as the pizzaiolo tossed the dough. Hot oven is the true trick, here. - 5

The sauce is good. They use a respected California brand of crushed tomatoes, called "6 in 1 All Purpose". This is a nice American brand to use according to many posters on www.Pizzamaking.com.
It's got a sweet flavor with a mild acidic flavor that isn't too sharp. - 4

The cheese is of quality mozzarella. It doesn't melt together like a big piece of plastic. It's got a ton of flavor and richness to cut through the sauce and the sweet & sourdough crust underneath. - 4.5

Overall, this is probably my favorite pie at the Jersey Shore. Many people rave about M&M in Ocean City but I always thought they were a bit over rated. Sam's pie reigns supreme for their perfectly cooked crust, succulant sauce, and flavorful cheese. There are times that the line for the outside counter extends more than half the width of the boardwalk. This is the spot in Wildwood. - 4

Sam's was voted Best Pizza at the Jersey Shore '08 on My Fox Philly. http://myfoxphilly.cityvoter.com/sam-s-pizza-palace/biz/66964 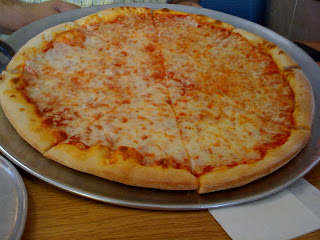 Appears a 16" round pie with a covered mozzarella layer and a mild layer of sauce on the crust. A few small bubbles are risen around the edges of the crust. - 3

Crust is solid. It passes the droop test and has a slightly sweet, fermented flavor. While the crust is good, the main draw of stopping in this place was the boasting of a wood fired brick oven. This particular pie was cooked in the gas oven at 500 for 9 minutes producing a slightly browned underside. A far cry from the few minutes it would've taken in the brick oven. The pie could've had the crispy, gently charred crust that is highly desired...but no use carrying on about what could have been. - 3

The sauce is ok. A bit watery and acidic, so nothing really stands out in regards to a terrific pizza sauce. - 2

The cheese is the typical shredded mozzarella found at Costco. Gentle flavors with sweet oily chewiness. No fresh Buffalo Mozzarella going on here. The shredded cheese seems to clump together and form a solid layer on top of the pie. - 2

Overall, this is a decent pie. I was upset when I saw that they have a brick oven but weren't using it when I got there. That was really the point of me making the trip. It says right under the Pizza Land logo on their menu, "Brick Oven Pizza". While the pizza tasted fine, it wasn't the crispy, crunchy pie I had hoped for coming out of the brick oven. I was told that they still use it "sometimes". Maybe I'll catch them on a day when they're using it during the next visit. - 2.5 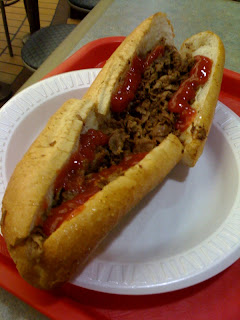 The appearance is of a 12" sub roll with about 4-5 ounces of chopped steak sans the onions(despite ordering them). The steak was enough to fill about half the roll. The cheese was completely hidden and stuck to the bread. -2.5

The roll was the best part of the sandwich. Nice texture that absorbed the juice and oils from the meat and cheese. Other than that, it was the only shining point of this whole experience. Possibly a Conshy roll but unconfirmed. -3.5

The meat is finely chopped from a few frozen pieces of thinly sliced(looked like sirloin, or London Broil)steak which are then hacked apart by the grill-man. No seasoning was used, which led to a boiled-like, bland tasting steak. The texture was ok but the lack of flavor really was a downer. The amount was poor, as well. I have to say that compared to most other places, there was about half as much meat used for the same pricing...and this wasn't from a good cut, either. -1.5

The cheese...2 slices thrown on top of the meat before covering with the roll and flipping over, making the cheese get stuck to the bread and fade away from the intermingling of steak & cheese. -2


Overall, this is about what I expected. A sloppy, lazy, poorly made sandwich. Not only was the unseasoned meat not from a fresh cut, they barely had enough on there to fill one side of the roll, let alone the whole thing...& I didn't get the onions I ordered! Never again, unless I'm trapped in the KOP Plaza with no means of transportation, and a broken leg. -2