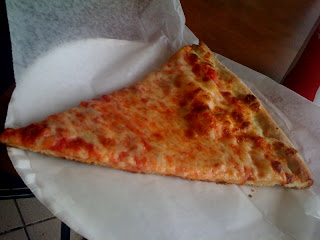 Appears a large slice with a crispy, crunchy, brown underside, along with some steam bubbles nearing the outer crust. A nearly solid layer of mozzarella seems to blend with a light layer of tomato sauce. - 3.5

The crust is very good. I've had this pie quite a few times and it has what I consider a "charred marshmallow" crust. It's crispy, crunchy, yet it retains a little bit of spring underneath the outer layer. The outer crust is crackly and flavorful. That oven must be really hot on the underside. I watched the guys in the back spinning the dough and it looked like it was actually a thicker style dough. No sign of cornmeal, or flour residue found. Oiled bottom? - 4

The sauce is ok. It's really playing second fiddle though to the cheese and crust. It's a balanced sauce that seems to compliment the crispy bread nicely. It's not going to make you buy the pie but it's not going to turn you off either. - 2.5

The cheese is of a shredded mozzarella that's been melted into the sauce. It sort of melds together with everything in a nice manner. Not fresh cut from a mozzarella ball, & certainly not a Buffalo mozzarella but it's decent enough. - 3

Overall, it's a nice pie. It certainly grabbed my attention enough to come back and order it again, which is always a good sign. The fact that I felt compelled to write about it and add it to the blog is testament enough in my book. Not one that will blow you away but the crust is a nice change of pace from the standard norm of pizza parlours that seem to pop up in every strip mall out in the suburbs. As a side note, this isn't a "true" Neapolitan pie, as it isn't from a wood fired oven...but that's what they call it, hence the tag. - 3.5