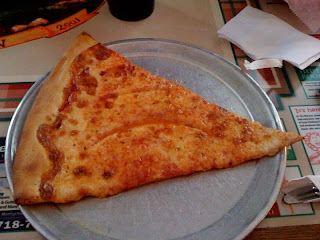 Appears an extra wide slice with a thin, golden crust, and a layer of cheese that overtakes most of the visible sauce on the pie. Light brown bubbles appear on the layer of mozzarella. There is a large pooling of oil, unfortunately, towards the center of the pie. I dabbed all of that off with some napkins and it was ok after that. - 4

The sauce is good. Not really penetrating through the abundance of cheese but it's enough for me to taste. I like it. It's of crushed tomatoes with some salt and sugar added. Mildly sweet, which is good to me. - 3

The cheese is of a large amount of shredded mozzarella...perhaps some provolone and sharp parmasean, as well. Not as nice as a fresh mozzarella from a soaked ball but it gets the job done. I'd consider it slightly above average. It's certainly not on the "worse than average" scale with some of the plastic cheeses I've had in my day. - 3

Overall, I enjoy this pie. It's probably one of the better pizza's that I've had on the outreaches of the suburbs, nearing rurual neighborhoods. For some reason, this particular pizza reminds me of the kind that you get at the boardwalk. It's large, crispy underneath, with a large amount of greasy cheese on top. I'd put it up there with some of the best Jersey shore boardwalk places, as well. An enjoyable treat far from the shore! - 4