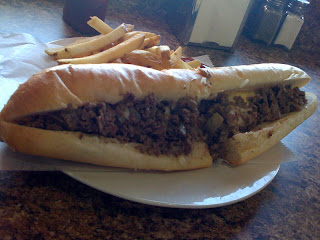 Appears a large, 12" steak roll that's been packed with steak, onions & cheese. It's not as jammed as Pudge's but it holds it's own. It looks appetizing enough. - 3.5

The roll is from the local suburban standby, Conshohocken Bakery. I knew it as soon as it sat in front of me...though I still confirmed this before I left. As always, a great roll with a thin but crisp outer shell and a semi-soft interior that holds up to juices. - 4

The meat is sirloin steak that's been very finely cut, much like the steak sandwiches at Pie in the Sky, over in Wayne. I always thought that Pudge's really had cut their steak finely until I ran into this place and the aforementioned. Regardless, it holds plenty of moisture and is tender. According to the menu, they don't use any oil to cook the steak. They let the steak cook in it's own juices...dangerous on preserving a tender steak but they make it work. If there's seasoning on here, it's light but the steak flavor shines through. - 3.5

The cheese is nice in this one. It's melted through the sandwich, covering most of the pieces of meat inside before leaving a tiny pool on the bottom of the roll. - 4.5

Overall, this was a nice sandwich. Another pleasant surprise for the 'burbs and an addition to the Ridge Pike/Main Street cheesesteak shops(Pudge's 2, Satchmo's, Ace's, Lou's 2, Sonny's, & Franklin's Classic). - 4

Have you tried the wings at this place?

Never tried the wings. I'll have to check them out sometime soon.

The wings are really good. Not sloppy wet, more of a dry rub kinda feel, but really good and quite large. Ask for them "well done" and they always turn out crispy. Generous portions, quality chicken, tons of bleu cheese / celery...all around, good stuff. AND THEY DELIVER!