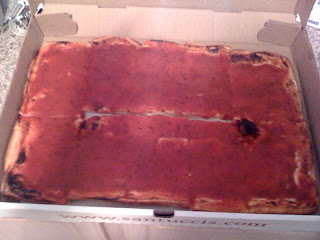 Appears a large 12" x 18" "square...ahem, rectangle pie." As you can see, the top is covered in a red sauce with many pieces of dried herbs. If I hadn't felt the heat coming off this thing, I would've thought it was a tomato pie. The whole milk mozzarella is hidden underneath the sauce. That's the way they do it. Cheese on dough, & sauce on top. Nothing overly appealing about the look. I can't say that I'm itching to bite a slice just by the looks. -2.5

The crust is decent enough. We call these "non-Chicago deep dish", or "deep pan/baking pan/or just plain 'pan'pizza" where I'm from. It's got a bit of a crisp to the edges due to the high oven temperature of 500+ F. Imagine breadsticks with crispy edges...there you go. - 3

The sauce...man, people rave about this stuff, like it's the greatest stuff out there. I don't get it. I found it to taste like canned Hunt's tomato sauce with a whole lot of dried oregano, black pepper, and basil added. I can't say I would repeat, or even seek out this pie because of the sauce. Furthermore, it was just too darn spicy with dried herbs. - 1.5

The cheese is a whole milk mozzarella that is placed on the pie before the sauce. To be perfectly honest, it was a huge stretch for me to even find, or taste the cheese on this pie. I actually took a knife to one slice and scraped the sauce off and there was a thin layer of melted mozzarella cheese there. It was very lost and muted behind the large amount of spiced sauce taking over this pie. - 1

Overall, it was a huge let down for me. After reading and hearing about Santucci's pizza for a long time, I was expecting to be blown away. My friend, Craig, commented that he had frozen pizza that tasted better than this. I didn't disagree because I felt the same way. This was my first time having pizza from these guys and perhaps it wasn't the best example. Lord knows there are numerous Santucci locations floating around Southeast PA nowadays...I'm sure several are franchised. Whether or not they are consistent between all the locations has yet to be determined in my estimation. - 1.5

Santucci's Pizza is a two time Best of Philly winner for their pizza.