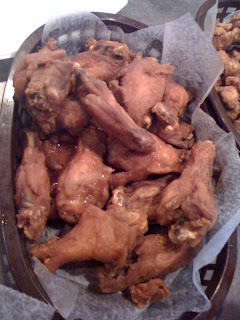 The texture is that of a "crispy" wing. Some people aren't too crazy about the well-done wing but I like them. I think it gives the wing some character on the outside before getting to that juiciness held on the inside. Perhaps some "crunchy" bits of fried skin along a few of the edges nearing the bone. - 3.5

The sauce is the next step up from Mild, and below the category of Extra Spicy, and Nuclear. For the sake of consistency, I'll try keep these all in the spicy/hot realm. The sauce is based in the Louisiana Hot sauce like Frank's, or Texas Pete's. This particular sauce seemed like it was on the salty side. Perhaps a good portion of butter is used in there but it was pretty distinct saltiness. Not a bad sauce but most of it had to be mopped up from the bottom of the basket. Certainly not a real "wet" wing. I would actually consider this a mild sauce, so I'm guessing that they must use Crystal, or butter crazy mix for the actual Mild wing they serve. - 2.5

The flavor is decent. The actual chicken with the crispy outside, along with whatever sauce I could mop up was tasty. The saltiness just made me want to drink more beer but the overall flavor came together nicely. Perhaps it's just me though...I tried some straight Frank's and Texas Pete's when I got home and they both seemed "salty" to me. Hmmm. - 3

Edibility was nice. I downed 9 of these badboys while my cousin took care of the other ones in the 20 count combo we ordered. I kept coming back to them and the flavor wasn't "in-you're-face" heat. In fact, it was so tolerable that neither one of us asked for blue cheese, which I usually get with my wings. The cuz was scared to order the spicy because he's not a huge fan of hot stuff but if I was ordering again, I would go with the Extra Spicy for some a little bit of burn on the lips, which is always expected when I order hot wings. - 3.5

Overall, I enjoyed them. I wouldn't say the wings are the best I've ever had but they're decent enough for mentioning...definitely above average. As a side note, if I were rating their chicken tenders, they ARE the best I've ever had. They use a light batter, which leads to a flaky, crispy outer shell of the tender. The Irish Fries are really good too. - 3

This place recently started bringing in some craft beer for my fellow beer enthusiasts out there. Out of their 12 available drafts, 3/4 of them were decent gateway beers for those just getting started into craft beer. They had Flying Fish, Dogfish Head, Sly Fox, Victory, and Yards to name a few. They will fill growlers too, which would make FWOT the 2nd place that I know of outside of The Boathouse that will fill growlers.