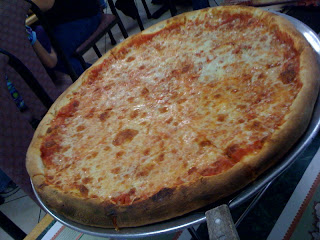 Appears a large, 16" round pie with a cooked, crimson sauce layered with melted mozzarella cheese, and dark brown edges of crust, nearing black at some parts. - 4

The crust is golden brown underneath and well cooked towards the outside of the pie. There are some char marks, which is a nice sight. The edges of the crust are light, crispy, and airy like a hearth baked wafer. The middle of the pie droops slightly due to the weight of the cheese but overall, it's decent enough. - 4

The sauce is good. It's a very light scattering of crushed tomatoes blended with a bit of paste and thinned out around the crust. Italian seasoning is utilized in there. A mildly sweet, tangy flavor. - 3.5

The cheese is the Grande cheese, mentioned in this previous post. It's light, tasty, and springy for a little bit of texture. - 4

Overall, this is a nice pie. I like that it's near charred along the some of the crust. I liked the flavor. I went back for a few more slices. All good things. Tosco's uses a brick oven. This particular brick oven is fired by gas(I believe)& not by wood, or coal though. They are also a BYOB, so feel free to run across the street at D&J Deli to pick up a few beers, or bring in a nice bottle of red for a slice, or a bottle of white for linguini with olive oil and garlic. With all of the favorable revues on Urbanspoon, I figured I would check them out. I'm glad I did. - 4 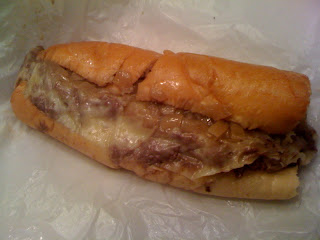 Appears a huge, overflowed mass of meat jammed inside a 12" steak roll. A molten glob of cheese is shown hardened on top of the meat and onions. This one looks like it'll eat me! - 4.5

The roll? Take one guess...yup! Conshy! Not a whole lot of need to carry on about the roll, as I've done before. Unfortunately, this time, the Conshy roll's integrity was tested. I think it did a fine job. - 4

The meat...wow, I guess I'm caught in a conundrum with this. The amount of beef rivals, perhaps even surpasses the legendary amounts that Pudge's gives out in their steak sandwiches. Heck, I've read that Mama's is only 8 ounces in a sandwich. There's no way. When you lift the bag, it feels like a small sack of potatoes in there...but I digress. The steak is a nice cut too. I'm pretty certain it's thinly sliced rib eye that has been cooked nicely, retaining some juiciness. Here's the kicker: while the meat is plentiful, there is virtually zero seasoning found in there. In fact, I usually take out some strips just to taste it alone from the bread and cheese. Tastes like margarine. Lots & lots of margarine. It almost kills me to give this score(based on the size!) but I have no choice. Flavor is probably the biggest factor when making this score. - 3

The cheese: I try to keep the ratings even on the same playing field but sometimes I hit a snag that I just have to accept and chalk it up for what it is. I use American Cheese as my baseline. Mama's uses a "secret blend" of cheeses. If I had to guess...Swiss, Mozzarella/Un-aged Provolone, Mild White Cheddar. These 3-4 together(per my guess)would be ok for a topping on onion soup, or maybe a fondue base. I just don't think it was working for me. Too mild of flavors to cut through anything. It seems to meld together with all the margarine flavored meat & onions, making for a bit of a let down. While they have a nice method of getting this cheese melted throughout the sandwich by throwing it on the hot grill, it's the actual cheese choice that is the downfall here. Would American cheese have made it better? Possibly. I'll never know though. - 3


Overall, this sandwich is a beast. It's giant and I would recommend trying to split it with a friend, rather than trying to tackle it by yourself. It's good if you have the munchies, or just need a quick fix to be filled. If you want the best steak sandwich you've ever had, I'd keep looking. Mama's was one of my go-to steak places when I attended Saint Joe's on City Ave. My taste buds must've graduated since then too. - 3

As a side note, this place has a nice sized following. If you want a steak sandwich, be sure to call your order in because you'll either get stuck waiting for quite some time(my wait was 20 minutes), or they'll run out of fresh rolls.

Just a short bit of me venting...

I happened to notice that my ranking on Urban Spoon had been taken over by another blogger's site. Upon further inspection, I come to find that this particular blogger is pimping out their "reviews" (aka 3-4 sentences without much substance...or identity, for that matter)- all over the country but they seem to have risen out of nowhere.

With less than 1/3 of my blog postings in the Philadelphia area, they amazingly have much more traffic linked through Urban Spoon in such a short span of time.

I could be completely wrong on this one but I'm guessing that these people have way too much time on their hands. Am I insinuating that they could be falsifying stats for their own benifit by clicking their own link? I don't know but I'm not buying that amount of traffic just comes out of thin air. As a part time project manager, I'm familiar with statistical spikes, laws, etc. Unless their followers in New Mexico, Minneapolis, Los Angeles, etc are clicking their Philly blog reviews, it doesn't add up. I know that I'm not too concerned about what's going on in Santa Fe eateries right now...maybe it's just me.
Posted by Mike at 5:04 PM No comments: 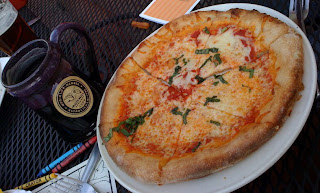 Appears a 12" round, thin pie with golden brown outer crust and a mixing of whole milk mozzarella atop a thin layer of crimson sauce. A scattering of chopped basil is scattered randomly along the top. - 4

The crust is flavorful. It has a mildly fruity, yeasty flavor that is cooked to a light, golden brown. The outer crust is crispy, crackly, and crunchy. Light pockets of fermentation cells are shown from a side-view along the outer crust. The interior crust is a little flimsy towards the center of the crust, not holding up to the weight of the sauce and cheese. - 3.5

The sauce is good. It's crushed plum tomatoes with a mildly acidic, roasted pepper bite. If it's sweet at all, it's the base tomato, itself, not from a sweetening agent. If I were the guessing type, I'd say these were San Marzano tomatoes. Tasty stuff! - 4

The cheese is whole milk, shredded, dry mozzarella. It's a decent tasting cheese. There are better options though. - 3

Overall, I think the pie is enjoyable. The flavors all come together and I'd say that they are using very good ingredients as shown by the scores above. They could tweak this pie slightly to be in the upper echelon but for right now, it's just better than the middle of the pack. - 3.5

Iron Hill has some of the best locally crafted beers in the area. I would highly recommend joining the mug club. For a small fee, you get a mug of beer instead of the standard pint sized offering. You are also eligible for Iron Hill promotions, and you earn a $25 credit for every 300 points earned. This membership pays for itself in no time. 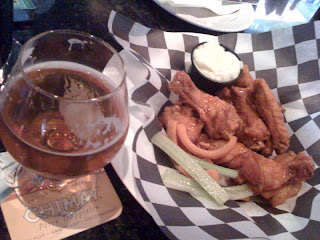 The texture is of a crispy skin wing with a nice coating of hot sauce, which is glazed on the outside. Really nice stuff. - 4.5

The sauce is awesome. It's an obvious Buffalo base with Victory's Hop Devil Ale added to the mix for an extra bit of bite mixed in with the heat. Delicious concoction. - 4.5

The flavor is of hot sauce, light butter, and spicy hops from the excellent beer. What a treat. TJ's is on to something with the beer infused menu. - 4.5

Edibility is outstanding. The more you eat, the more you want. The flavor grows on you because it's not just the typical hot sauce flavor jumping out. The hoppy, IPA flavors are in the background and even this one out, toning down on the heat of the sauce. - 5

Overall, this is such a nice surprise. The fact that they infuse the Hop Devil with the hot sauce makes it classic with a twist. - 4.5

The beer in the picture? That was Avery's Hand of Doom, which went perfect with the wings. TJ's has one of the best beer selections around in the area. They throw events and have daily specials. This is a sure fire winner for any beer fan. 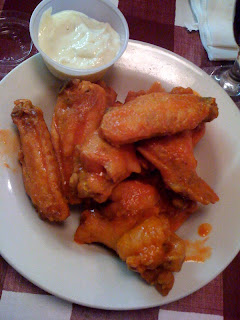 The texture is of a wet, juicy, wing that's been soaked in a decent helping of hot sauce. If you lift the wing up, juice will drip off. The skin is fried but gives way to the drenching. - 4

The sauce is a nice blend. Upon inhaling the aromas, you get light watering in the eyes. The heat is well balanced with a mild sting that comes through after several wings are eaten. You get a mild burn around the edges of the lips. - 4

The flavor is very fresh with a blending of the fried chicken that retains the juiciness on the inside while blending with the hot flavors from the sauce. - 4

Edibility is really nice. Like I said, the heat doesn't even scratch the surface of being un-edible. It's hot enough to be tolerable and the peppers don't really kick in until after many are consumed. No tear jerking with this one. - 4.5

Overall, this is one of the better wings you can get in Collegeville. The last time my buddy, Carl came over, this was the selection that I made for wings. Sure, there may be some better ones out there if you venture out of the 19426 but this is a safe bet if you're in the 'burbs. - 4 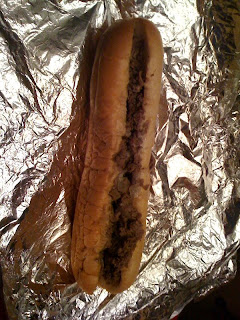 The roll is a decent one. I'm not certain but I'd say it was either a Conshy roll, or one of similar quality. Semi-firm on the outside and soft interior soak up the juice. - 4

The meat is thinly chopped ribeye, which is seasoned superbly, and retains the juiciness. It's cooked just right. This would be getting a perfect score if there was just a bit more meat on the roll. High quality deserves high scores. - 4.5

The cheese is evenly mixed throughout the sandwich with most of the product landing underneath the meat. Not a bad job, though. - 4


Overall, this is a really nice sandwich. I was actually thinking about getting another the following day. That's a good thing...I'm still thinking about it. This was recommended to me by my buddy, Tom Bastian. Great call, Tom. I'm glad I finally got around to checking it out. As a side note, every other sandwich I've had from this place has been great. With the newly expanded dining area, you don't have to get your food to go anymore. Grab some grub, hit the pinball machine, then indulge in one of the best milkshakes that your tastebuds will thank you for. - 4