What can I say about this place that hasn't already been said? These guys were "gastropub" before the word even existed in the United States. They've been serving up craft beer, tasty meals, and gourmet sandwiches since the demise of Sam Adams Brew House (currently Nodding Head Brewery).

They sport 11 taps and 2 cask conditioned ales. The burgers and fries are excellent. Flavorful, juicy burgers that are filling and unforgettable. Local brews that will satisfy beer fans.

The beer pictured below with one of their signature burgers is Philadelphia Brewing Company's Hop Harvest. 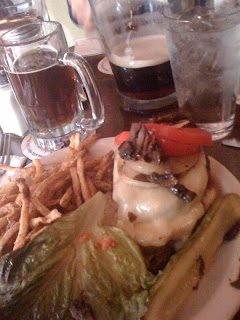 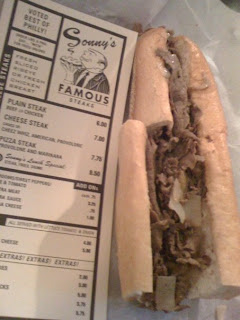 Appears a 10" sandwich with just enough meat covering the inside of the sandwich. - 4

The roll is an Amoroso roll 10". It's decent enough. The interior is a little soft but it gets the job done. I won't complain about it but I would take a Conshy roll over it any day. - 3

The meat is thinly sliced ribeye. It's very, very tender and juicy. Some pieces of the lightly seasoned steak show a hint of residual pink left in the freshly cooked meat. Great stuff! If it were packed like a Mama's, or Pudge's steak sandwich, it would warrant a perfect score. - 4.5

The execution of the cheese is ok. Not really mixed throughout like I like though. Most of the cheese is sticking to the bread. Every place really does it different. I'm just set on having it done where you've got it on top, middle, and bottom...not to the extent that Steve's does it but enough to be fully integrated into the sandwich. - 3

Overall, it's a good sandwich. Sonny's is the place in Old City to get a cheesesteak. Some people swear by those Amoroso's but others(myself included)have had better examples. The shining light was the steak. Succulant, juicy, tender meat that hasn't been overcooked into grissle is a treat. Based on that alone, I would love to stop in next time I'm in the area - 4 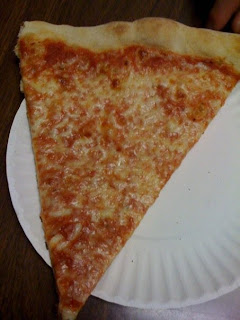 Appears as a thin slice with dark brown bottom. Melted mozzarella coats the top of the pie with a medium sized crust on the edge. - 4

The crust is thin, dark brown, crispy, and crunchy. It's got a bit of a bitter, wood-like bite on top of a thin Italian bread flavor - 4

The cheese is alright. It's of a part skim shredded mozzarella. It's got some nice flavor behind it but it's nothing that stands out among the pack, either. - 3

Overall, this pizza is a good find. It's a popular spot for the crowds that roll out of the bars late at night. It's a good pie to chew on when you're passing by. I wouldn't make a special trip for it but it's decent enough to mention. - 3