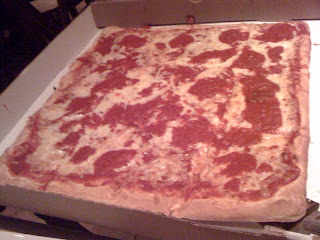 Appears a large, 16" long rectangular pie. At first glance, one might mistake this as a Sicilian pie but upon closer inspection, it's a Greek pizza. Not nearly as thick as a Sicilian...more like a thin, pan pizza. The only weird part is that they bring it to your table in a cardboard box. What's that about? VF Pizza is actually a nice place inside and the waiter brings a cardboard box over to the table side stand. The outer edges are a deep golden brown, as is the underside with a few char marks near the outer edges. FYI - this pizza had extra sauce added to the top. - 3.5

The crust is medium with a thicker outer crust that is crunchy on the outside. The crust underneath the sauce and bread is mildly crispy on the underside. It has a distinct sweet flavor similar to Pilsbury bread dough. - 4

The sauce seems to be of a decent quality canned crushed tomato. It's a lightly spiced, tangy, sweet flavor that has a rustic appeal to it. Not the best sauce I've ever had but it seems to hold it's own. - 3.5

The cheese is alright. Seems to be a part skim mozzarella & whole mozzarella blend but it fits in nicely with the texture of the pie. As it cools, it gets a little rubbery but the flavor, itself is good. No oils seem to ruin it. - 3.5

Overall, this is a decent pizza. It's been talked up a bunch on Chowhound in the past and the establishment, itself, boasts that they've been rated #1 Pizza by Citysearch for whatever that is worth. I'm not itching to get it again but I enjoyed it enough to write about it. My wife wasn't as kind as I was. To her, the sauce is a make/break deal but it hit the spot for this particular night. - 3.5