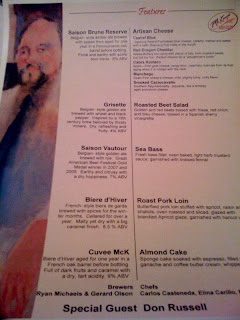 I was honored to be one of the lucky beer fans in attendance at McKenzie's first beer pairing dinner. Special Guest Speaker, Don Russell, was there. He gave insight on Farmhouse Ales and shared a drink at each one of the guest's tables. Brewers, Ryan Michaels, and Gerard Olson spoke about the crafting of their wonderful libations. Dosings of brettanomyces, and bacteria in wine barrels, or at bottling have led to extremely rustic, and tasty beers that aren't often found in this pocket of the United States. Tastefully, attenuated ales that have garnished respect from the well known Great American Beer Festival.

The dinner started with a pairing of Saison Brune Reserve with an artisan cheese plate of Cashel Blue, Red Dragon Cheddar, Cabra Romero, Manchego, and Smoked Caciocavallo. I felt the pairing was a nice match, having nice similarities, and contrasts. If I had to pick the best match of the bunch, I would say the Manchego went best.

Next was the Grisette paired with a Roasted Beet Salad. Grisette is a lighter version of a Farmhouse Ale that was given to the farmers and miners as a refreshment after a long day's work.

The Saison Vautor (Vulture in French) was paired with Sea Bass.
The light, neutral fish took a backseat to the wonderful GABF winner ('07 & '09). 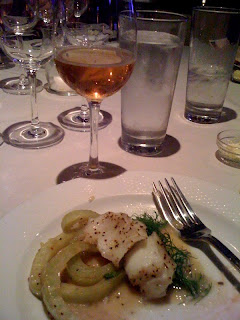 I'd say that was a good thing because this beer is certainly a shining star that stands alone in any arena.


Following the wonderful GABF big boy, was the Biere d'Hiver from 2007 paired with a Roast Pork Loin. These biere de garde style beers are meant "to store". 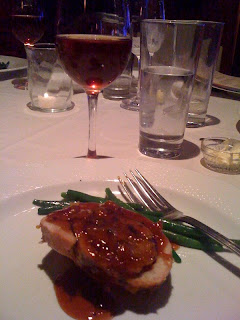 This was such a wonderful pairing, as the caramelized sugars on raisins, apricots, and and brandy accented the caramel, vanilla, toffee, and gentle spicing from the beer.

Finally, they wrapped up the meal with the Cuvee McK paired with an almond cake soaked with espresso, and filled with a ganache, and coffee butter cream. Delicious ending to a wonderful night. 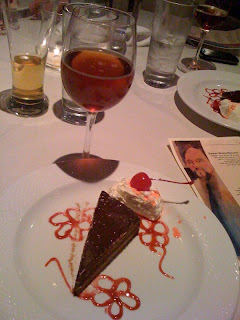 I look forward to more events like this from McKenzie Brew House. It was a winner on all counts. Thanks to all involved for such a wonderful night of food and beer!
Posted by Mike at 10:35 PM

Sounds like a really great event, sorry to have missed it.