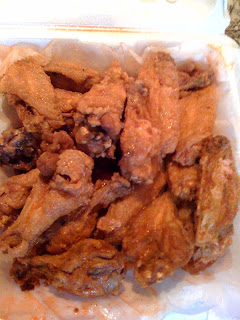 The texture may be one of the best wings I remember having in a long time. Crispy outside with a moist, juicy center. The sauce sticks to this crispy outer shell but that crackly outer shell makes these nearly outstanding. - 4.5

The sauce is of superior quality. Keeping this one simple plays to the benefit of the wings. It's mostly Frank's Hot Sauce with perhaps a touch of margarine, or oil and some extra shakes of garlic powder. - 4

Edibility is excellent, as well. I can go much hotter than the typical hot wing, so this simple, modified Frank's Hot Sauce version was suitable for continued eating and kept me coming back for more. I ended up slamming double digits on day one and I couldn't wait to get into the leftovers the following day. No need for the blue cheese unless you love blue cheese. I happen to enjoy blue cheese but I wouldn't put it on till my last bite because the sauce is so uncorrupted that you have to respect the simplicity of it all before introducing any foreign elements. - 4.5

Overall, I would be eating these once a week if I didn't have so many other food items to attend to. Everyone I know that has had these, have spoken highly of them. Even my buddy, Eric(egajdzis) speaks highly of them and he's about as picky as I am, if not more with local cuisine. Grab 'em and enjoy! - 4

Ortino's has 5 taps featuring local Pennsylvania craft beer, or other beers featured from the Philadelphia area, or beyond. There are also 2 large coolers directly to the right when you walk in with different six packs of craft beers, imports, and macro/malt liquor. Straight ahead, there is a mix of malt liquor and craft beer with other microbrews featured in the Philly area and beyond. A nice beer find for the Philadelphia suburbs.