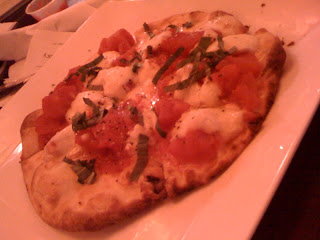 Appears a small(maybe 8-9"), oval shaped Middle Eastern style flatbread with some cut pieces of tomatoes, melted, skim mozzarella, and slivers of basil with a drizzle of olive oil. Perhaps a touch of char around a few of the bottom edges of crust. Good thing we ordered a few other things for the 3 of us because we all looked at each other when the waitress dropped it off. Serious lack of substance here, even for $6.00. I can appreciate "different"...in fact, I welcome it if it works. I don't think I would ever be inclined to order this based on appearance alone. - 2

The crust was about as well as anticipated. An unleavened flatbread that seems to be a bit softer than expected on the inside. I can't knock it too much. For a "pizza" though, it probably isn't the best item to use. I would say the same thing about a tortilla, or an English Muffin. While you achieve some sort of end result, it's not always leading to the best results by way of creativity. - 2.5

The sauce...ok, so it's not really a sauce per se; rather cut pieces of the highly sought after San Marzano tomatoes, which I use in my personal pizza sauce at home. The fact that it's not a sauce and simply cut tomatoes is forgiven. The downside of the tomatoes...they weren't rinsed. While these San Marzano's had the signature sweet & less acidic flavor to them, they still contained that bitter canned flavor that you get unless you rinse them. I've been using Varasano's method of rinsing canned tomatoes for the pizza sauce(or in this case, just cut tomatoes) for a few years with good results. - 3

The cheese may have been the best part of this pizza but in no way was a shining star due to the uneven placement and holes left on a portion of the pie. I thought it was ok. It had a nice, flavorful, fresh chewiness that was weighed down by some of the other things going on. - 3.5

Overall, I wasn't really a fan. I appreciate the attempt at something different but I don't have a desire to repeat the meal. I was under the impression that some of the cooks would be preparing the food. I was naive to think that this was a scratch kitchen. It clearly wasn't in terms of preparation, presentation, and flavor. The naan, itself can be found over near the dairy foods, and the San Marzano's are in with the canned tomatoes. It's not hard to see where I'm going with this. Someone grabs stuff off the shelves, assembles per instructions, and heats. - 2

As a side note...we had a bowl of soup, this pizza, and Tuscan fries, along with 2 beers for the table. I believe the damage was $28(tips are included here). The bowl of soup was decent, though I believe it was simply a canned, or pre-prepared style soup that may have been tinkered with. A bit salty. The fries were salt and herb overkill with an absolutely dreadful dipping sauce that they called "finishing sauce". I'm not sure what it was but it tasted like oil, dates, and tamarind paste. I believe you can actually purchase the finishing sauce in the store but I wouldn't bother after getting a taste here.

On to the beer:
The takeout beer selection is decent. They've got a spot dedicated to some of the local PA breweries. They've also got the well known macro's, and quasi-micro's available. For the most part, I feel a bit underwhelmed perusing these aisles. This beer selection caters to gateway beer hounds, who have had some good beers and are ready to start exploring the different fermented creations of the Brewniverse. Unfortunately for those like myself, we ventured down that path many years ago and it takes a bit more to get us excited. Not all is bad though. There are some winners to be found in the bunch...some of the better, well known German & Belgian beers, Allagash Brewing from Maine, along with limited selections from Port Brewing and Russian River Brewing in California. In closing, the way I feel about this takeout section is the same way I feel about going to some concerts...I like the band but sometimes the fans ruin it for me. When I see employees answer a question about a beer as, "It's a Belgian Ale", or when I hear a middle aged couple try to figure out what the different colors on the Chimay bottles stand for..."I guess the Reserve means it's aged like a wine, and the Red is like an Irish Red Ale, and the White is a Belgian White Ale"...or the two cool college chums on a mission for shotgunning "dark" beers, it makes me feel like the ruler of amateur hour. I am grateful that the option is there though. It beats the old field that was there before. 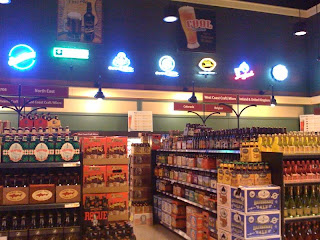