Capone's was offering a nice variety of beers for this latest event...

The event started at 11 am and I knew ahead of time that there would be no way I would be able to contend with the masses that come out in droves to grab the delicious hoppy liquid brewed by Santa Rosa's Russian River Brewery. As a longtime patron (& perhaps the original craft brew demander) of this establishment, I've been to dozens of the monthly events. This one would rank in the top 6-7 from what I remember. The only downside is that I don't know what the beer menu will read ahead of time like it once did during the first 7-8 events (about 3 years ago)when I would actually write the descriptions and had influence on what would be on the beer menu. Before I made this recommendation, I had only seen 2 other establishments in the state do so. This seems to be Capone's trademark now. Enough of the small talk...on to the beer!

On tap at Capones...
Appears a deep dark rich opaque black with a small tan head that quickly fades into a gentl cap.
Smell is of coffee, vanilla, cocoa, wood, and herbs.
Taste is of the mentioned flavors, dulled down a little with mocha & chocolate being the mainstay.
Mouthfeel is full bodied, oily, slick, and tar filled with coffee.

Next up was the Pliny The Elder. I wished for the Younger but I've had it many times already. The Elder is still a winner in anyone's book... 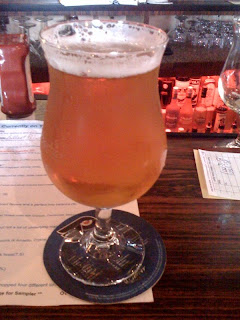 Appears a light orange yellow with a small white head and scattered lacing.
Smell is of tons of ballsy hops followed with tons of malt. Pine and citrus notes are abundant.
Taste is of resinous hops with a sweet malt coming through.
The mouthfeel is of spicy hops that come through in the full bodied flavor.
Drinkability is great. This is one of the few great beers out there. 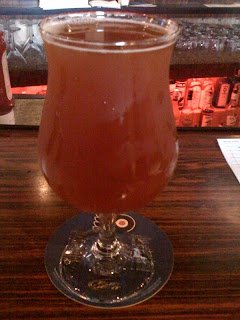 on tap at Capone's...
Appears a densely, nearing opaque haze of deep orange hued amber with starry streams of lacing rising to the top of the small off-white cap. Quickly fades into a small collar. Plenty of scattered bits of lacing are left.
Smell is of intense orange cream, mild touches of caramel, vanilla, biscuit, and freshly baked white bread all come together. More hoppy, herbal notes become evident as this beauty warms.
Taste is of the aromas with more of a peppery, yeasty dough flavor that is simply balanced and enjoyable without that overkill of hops that you meet in some beers of this style.
Mouthfeel is full bodied, chewy, nearing syrupy with a much applauded, evenly balanced beer.
Lord...is this really 9%? Could've fooled me on my best, beer inspired day. Shane, please have Bella Vista drop a sixtel of this nectar off for my Collegeville kegerator. I promise to give a nice, thirsty home where Sixpoint will be welcomed!

If you've never been to any of the local beer events in SE PA, do yourself a favor and give it a shot at least once. If it's not your scene, so be it. I'm not one for crowds but when the good stuff calls, you can't pass up the opportunity. Give me a shout if you're looking to experience an event. I'll be your guide if you're a newbie, or the experienced beer journeyman if you're just visiting the area!
Posted by Mike at 10:01 PM