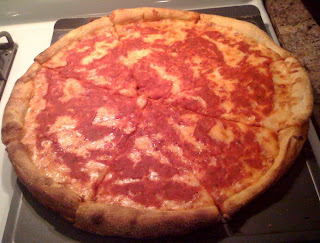 Appears a large, 18" pie with a thick, bready, outer crust. Cornmeal is scattered underneath and along the crust. Heavy scattering of sauce is swirled overtop of the layering of cheese. - 4

The crust is on the thicker side. This is more of a bread-type dough. I believe this pie is baked for a few minutes before the ingredients are layered on. The reason for my suspicion is the way the crust has baked. It's bready, and airy, which I don't believe would get this way had the sauce and cheese been weighing down the dough while cooking. Cornmeal instead of flour?...ok, some people may not get it but if you're a fan of Charlie's in Norristown, you'll understand that this is a unique, tasty way of getting the pie on and off the peel. If you've had a bakery fresh rolls, you may have seen cornmeal, or semolina used on the rolls to prevent sticking. The downside to using cornmeal? If you use very high temperatures, it has the tendency to burn; wheras, flour doesn't. I've done a lot of experimenting with both. On this pie, it's ok. - 3.5

The sauce is pretty nice. It reminds me of the savory tang style sauce like Charlie's uses but it has a sweeter quality like that of Franzone's albeit not quite that sweet. - 4

The cheese is actually quite good on this pie. They put it underneath the sauce, kind of like the Charlie's Red Top. This tastes like a mix of Part Skim Mozzarella, Cheddar, and American. It really cuts through the crust and sauce nicely. - 4.5

Overall, I thoroughly enjoyed this pie. I've had it once before about 4 years ago and it's about what I remember. The sauce may not be as sweet as I recall but perhaps it's just my ever-changing palate and memories. I will certainly come back and order more pizza from this place. It's a local favorite. - 4

FYI - Penny's doesn't have a dining room. It's takeout and local delivery only!