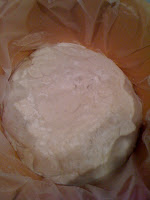 Step by step instructions - per several requests on my method to making a rustic pizza in the "style" of a Neapolitan pie.  To clarify, this is not a true Neapolitan pizza, which adheres to a set of traditional rules.
To the left you'll see a hand mixed dough ball that has only been sitting for about 15 minutes.  I started with some filtered, warmed water and some King Arthur Bread Flour.  True Neapolitan pizzas require using a 00 flour, which is of a finer mill and lower protein % than the KA Bread Flour I like to use.
Keeping an unmeasured amount of flour in the bowl, I add the warmed water until it becomes a murky, thick stew of poolish.  I add a pinch of sugar, a few drops of honey, and some dried active yeast. I added a quick grind of sea salt to the opposite side that I've pitched the yeast...yes, keep that salt away from the yeast.  I let it sit for about 20 minutes before I start hand mixing with a spatula.  Yes, I know that it's easier to use a mixer.  I've got a kick-ass KitchenAid, which comes out rarely.  For a job this small, it's just easier for me to not even bring that beast out of it's cage.  I've added more flour until it becomes an actual dough ball.  I move the ball to a mildly greased with olive oil bowl.  I cover with some PAM sprayed plastic wrap to prevent a hard skin from forming on top of the dough. 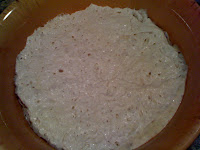 Off to work! 9 hours later, this is what I've got. A nicely fermented ball that has increased in mass by about 125%. Look at all the tiny CO2 streams that have caused small bubbles at the top of the gluten mass.  For the few drops of honey I added to the initial mix, the aroma is clearly filled with honey.

I've added flour to the top, and punched the dough down. 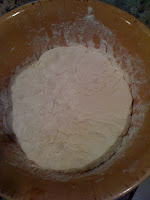 What to do in the meantime, while the dough re-expands?
Make the sauce. 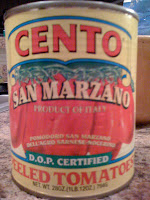 I use Cento San Marzano D.O.P. Certified Peeled Plum Tomatoes.  I prefer this brand because Cento uses a lined can.  Some of the cheaper San Marzano canned tomatoes use an unlined can, which gives the tomatoes a metallic, bitter flavor.
Why San Marzano Tomatoes?  These tomatoes are grown near Naples, near the rich, volcanic ash soil by Mount Vesuvius.  The soil has a base heavy pH, which leads to a less acidic tomato...or that's how the theory goes, anyhow. 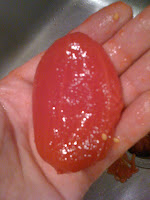 Here is a picture of one of the plum tomatoes out of the can. 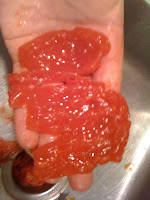 A cleaned, & gutted San Marzano with the stems and seeds removed, exposing the viable, fleshy pulp. 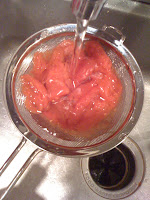 As talked about previously, I use the Varasano method of rinsing the tomato pulp.  Now, you'll find a good 5-6 ounces of puree left in the can.  I would advise not using it.  It's bitter and not very tasty.  Taste a piece of the rinsed tomato.  See how flavorful and mildly sweet it is?  Now taste the puree.  Not so hot.  Better off just dumping that extra puree left in the can. 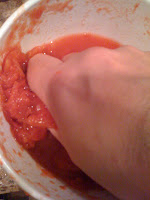 Old school method, here.  Hand crushing the pulp of the tomato flesh in the bowl after they've been rinsed. 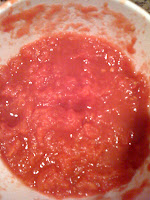 Here's the base product of the pizza sauce.  Simple crushed San Marzano plum tomatoes with the stems cut off and most of the seeds removed. 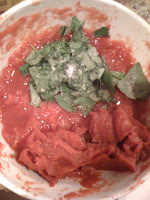 Some people will disagree with what I do here, as breaking from a traditional, simple crushed tomato method.  Whatever.  I like to add a half can of tomato paste, a good bunch of cut basil, some ground sea salt, and about tablespoon of sugar.  That's the way I do it because I like it on the sweeter side.  Some may prefer a more acidic flavor.  Those that do...stay away from the amount of basil and sugar that I use.  Some may not like the addition of paste, either.  I prefer a thicker sauce, hence the paste addition.  Do as your heart and palate desire. 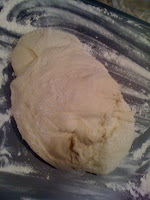 I've dumped the re-risen dough ball on a sheet that's been floured.  This amount of dough will get you two medium sized pies.  I ended up cutting this much in half because I could make one plain pie, and one specialty pie. 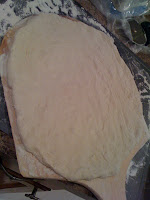 After flouring the peel, I've stretched the dough out and given it a few shakes to make sure that I would be able to get the stretched dough off the peel.  Seems good to go! 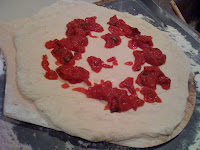 I've decorated the stretched dough with some of the pizza sauce I've made.  Try to keep the majority of the sauce away from the center, or you'll get a limp, floppy slice nearing the point.  Nobody wants that.  Keep any heaviness towards the outside of the crust with just a thin sauce in the center. 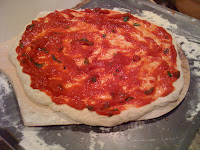 The sauce on the unbaked pie after I've spread the exact same pizza sauce out.  Most pizza parlors will tell you that you should see the pie visibly through the sauce.  I usually go for a more saucy pie, so you'll want to see through some parts of the pie with heavy spots around the unbaked pie. 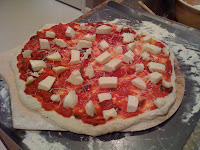 Almost ready to go.  I've got some large chunks of whole milk mozzarella scattered around the top of the unbaked pizza.  I added a small amount of shredded Locatelli, as well.  I'll give the pie one last lift and a small shake and a short blow underneath to make sure that it's going to move off the peel when I want to slide it onto the hot stone. 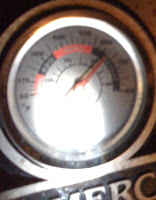 Okay...now here's not something you see everyday.  I've prepared my outside grille with a pizza stone and all burners fired on high.  I took this picture after I opened the lid to make sure everything was ready.  Unfortunately, I lost almost 75 degrees in doing so.  We were at almost 700F before I lifted the lid.   No matter...the stone has absorbed the heat.  I didn't have my digital laser thermometer handy but I'd be willing to say that the stone was still radiating at close to 700F.  I've actually had this grille at over 800F before but it's a bit cold out, extremely windy, and there is a light drizzle coming down.  For a true Neapolitan pie, you need a wood fired oven.

Until I get a house without a HMA guideline that I need to adhere to, and I get a small, outdoor hearth oven, I've got to do things this way to get my desired results.  The home oven won't get higher than 550F.  Trust me, I've tried, and tried.  It won't happen.  Most pizza parlours will only cook at 500F, which is ok for a pan pizza but for the style I'm shooting for, it requires high heat.  The outdoor grille is the only hope of generating that much heat.  I've tried the Heston Blumenthal method as outlined on Pizza Hack with less than stellar results, yielding a black bottomed, overly charred pie with sparkly charcoal remnants underneath, not knowing whether or not I was ingesting pieces of the cast iron skillet, or overly carbonized bread.  The cheese tends to run down the side of the skillet and into the broiler once it's melted, also.  The other downside to the that method was the pain in trying to keep the pizza on the small surface of the cast iron skillet, along with the amount of smoke produced out the broiler, resulting in a smoke filled downstairs and an irritating smoke alarm that made me think about ever attempting again, or recommending to anyone else.  BTW - you'll notice the crack in the pizza stone.  Let me tell you...I've cracked a few of these things and chucked a few after doing so.  My personal opinion?  Let it crack.  It'll happen sooner than later with this kind of direct heat, especially if any cheese drips on the stone.  Just push it back together and it'll be fine. 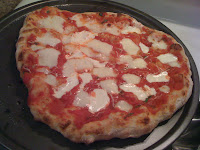 The finished pie, after less than 3 minutes of cooking on the pizza stone/grille method.  I've got it on a pizza crisper, which allows air flow underneath the cooked pie.  Very little moisture will collect during the "sitting" process with a vented airflow. 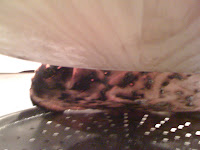 As you can see the underside, there are beautiful char marks all around the bottom.  Wow, this one went almost perfectly as planned.  Scary.

An artisanal, rustic style pizza.  Sure, not a perfectly round pie but they usually aren't when using these methods.  It is rustic, after all.  The most important part is...how does it taste? 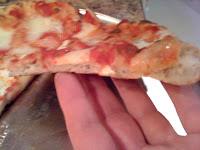 The profile view shows an abundance of CO2 pockets left during fermentation and solidified during the high heat cooking.  Delicious pie.  My daughter commented that it was her favorite pizza that I've made so far.  That's always a nice, welcomed sign! 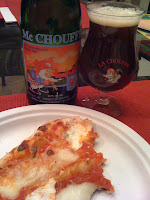 A great pairing to the rustic pizza?
McChouffe beer.

4
look: 5
smell: 3.5
taste: 4
feel: 3.5
drink: 3.5
Pours a deep chestnut with a four finger light tan head that lasts. Nothing but huge sticky lacing clings all over the glass.
Smell is of lightly roasted malt with a hint of chocolate powder and lots of apple juice esters coming through with perhaps some other fruits(raisin-esque) hidden in the background of this earthy brew.
Taste is good. Belgian La Chouffe yeast is very evident in the taste with some semi sweetness coming through in an earthy taste with some caramel notes, figs, and apple juice being the biggest flavor picked up for some reason.
Mouthfeel is decent. A hint of spice in this slightly malty brew with a dry finish. 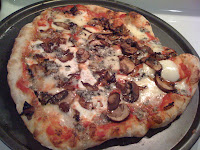 The other pie I produced was the same base style, only this one had caramelized onions, mushrooms(crimini, oyster, and shiitake), along with crumbled Spanish Valdeon Blue cheese.  It had a nice earthy aroma and flavor to it.

Again, the underside shows some char marks.  I lost a little bit from the heat transfer once I opened up the lid again.  Probably still closer to 600F.  A nice, crisp crust though.
Hope this was helpful!  Let me know if you have any questions.
Posted by Mike at 12:32 AM