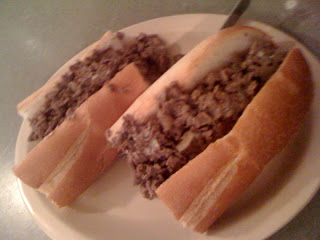 Appears a packed, 12" with chopped steak on a nice looking roll.  Bits of fried onion are scattered within the helping of beef. - 4

The roll is a Liscio roll, which I covered in my previous review of Steve's on South Street.  Same wonderful experience of a great roll being made for this type of application.  I could see it doing well with a roast pork sandwich too, holding in all that juicy goodness while retaining the firm outer crust. - 4.5

The meat is finely chopped but juicy.  Mildly seasoned and a decent amount piled in there. - 4

The cheese is ok.  Most of it is stuck underneath the meat and on the interior of the roll.  There is a little bit that is in the the middle but the execution of good cheese blend for balance with the steak could be better. - 3.5

Overall, this is a nice cheesesteak.  It's a good one to seek out if you're in Delaware County, or heading to the Springfield Mall.  It all starts with the choice of a great roll.  The cheese could be laid in there better but this is a fair deal for the cost. - 3.5

FYI - Cash only establishment...and I wasn't given any receipt for my records. 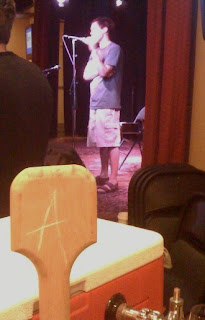 With Philly Beer Week officially being complete, let's look back on some of the highlights from my week...
It started off with the Hill Farmstead tasting at the Kennett Flash.  Shaun Hill amazed the crowd with his beer and an impromptu speech, which reflected his brewing journey.

As most already know, I was in Chicago for a portion of Philly Beer Week.  I'll touch on what I did out there in a bit... 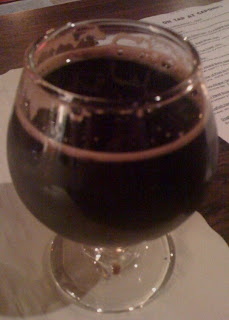 So, what else did I do?  I was growing green with envy for the most part but I was able to hit Capone's for an absolutely amazing night with beers(and representation) from Ayinger, Sint Canarus, Stillwater Artisinal Ales, Dochter van de Korenaar, and 12 Percent Imports.  Plenty of excellent beers to be had that night.  The standout for me was Cigar City's - Hunahpu's Imperial Stout.  I'm fortunate to actually own a bottle of this but I'm extremely delighted that I didn't have to open my rare bottle to get to try it.
4.15

drink: 3.5
Appears a pitch black with a small tan head that quickly fades out into a mild cap. Scattered bits of lacing are left around the glass.
Smell is of molasses, herbal tea, chalk, black grapes, spicy black and dried red pepper.

Taste is of the aromas with vanilla yogurt, cinnamon, pasilla peppers, and red grapes.
Mouthfeel is full bodied, spiced, a bit of chile heat lingering with cinnamon and cumin. A bit of warming abv noticed in this. 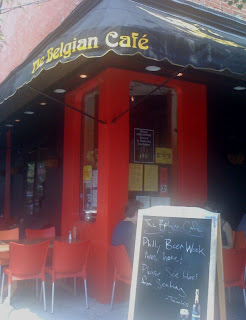 I was also thankful that I was able to make it out to one of the many Meet the Brewer events at The Belgian Cafe.  The draw for me was meeting with the Head Brewer from one of my all-time favorite Belgian breweries, Marco Passarella of St. Bernardus.  We chatted about one of the many enigmas that has surrounded the St. Bernardus beer - The difference (if any) to the highly sought after Westvleteren beer(The 8 & 12), which was brewed by St. Bernardus from 1946 through 1992.  The difference?  The yeast.  Fermentation, grain, and sugar are the same.  In fact, St. Bernardus uses the original yeast strain in their beers today.  Westvleteren now gets their yeast from Westmalle.  In addition to having a great conversation with one of the "brewing minds" of our time, I had the chance to check out some culinary delights from The Belgian Cafe, along with another brew.
Look at this Belgian Toast.  It's French Toast but it's got caramelized banana lambic mixed with Belgian candi sugar.  Divine. 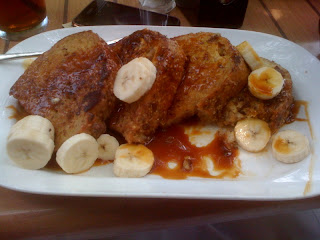 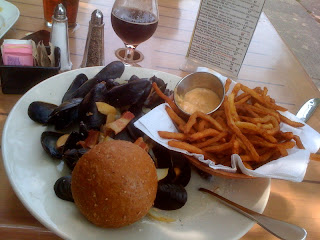 I checked out Django mussels with frites.  Really excellent stuff with a lightly potent broth that is great for dipping bread.  I paired up a beer from Danish brewery, Nøgne Ø.  This beer was the Sunternbrew...4.15

Appears a murky brown with mahogany edges and a light beige head that quickly fades out into a mild collar. 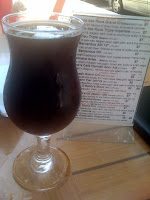 Smell is of caramel, smoked wood, chocolate, brown sugar, and espresso beans.
Taste...wow, I should've gotten the smoked trout with this one because it's really smokey in the flavors. Some residual sweetness lingers after the smokiness subsides but it's on the sweet, and aggressively strong end of the spectrum. Smoked meats, roast chestnuts, earthy mineral flavors pull through for a dangerously complex potion.
Mouthfeel is sticky, effervescent up front, sugary, gummy with tar and a chewy, lip smacking sting.

I was told by my buddy, Steve (aka hopdog) that I missed a killer time at Capone's for the highly anticipated Odell event, as shown here by our fellow beer hound, Brian, who runs I Am Beer Wise.


A quick peek back at what I experienced on the Chicago trip during Philly Beer Week...

Beerhoptacular! event, which touted many local breweries, along with some of the better beers available in the Chicago market... 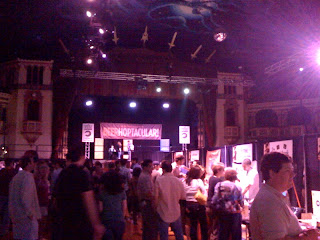 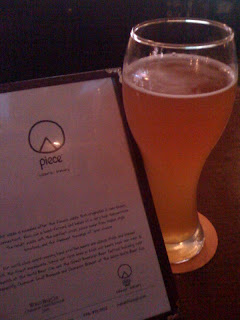 A cool place called Piece, recommended to me by my buddy, Tom L, who frequents Chicago yearly.  They made some terrific beer, including this Hefeweizen shown to the left.  They also make pizza in the New Haven style.  I thought about going full tilt for the clam pie but opted for the plain, which was delicious. 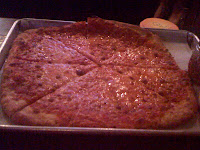 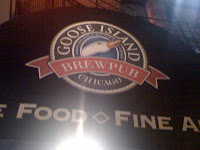 I managed to hit Goose Island for some terrific treats, as well.  Some of these beers were only available at the brewery, so I was glad to have checked it out while I had the opportunity.
The wonderful Hopleaf Bar in Chicago has great selections of craft beer. 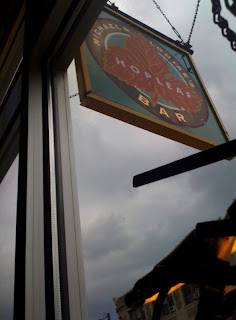 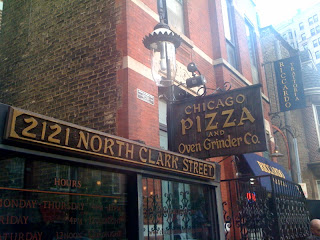 Finally, the 2 pizza places that I have wanted to check out for a few years now...
Chicago Pizza and Oven Grinder Co. for their Pizza Pot Pie. 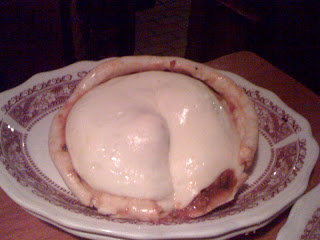 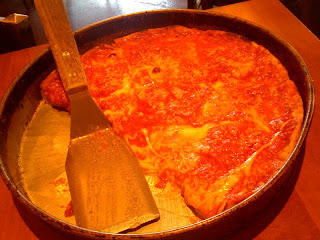 Philly Beer Week officially starts tomorrow, June 4th.  Many people will be attending a ticketed event for The Opening Tap at The Independence Visitor Center, which kicks off at 7:30 PM.
Yours Truly will be working at the Meet The Brewer Event in Kennett Square(come and say hello) that will be featuring my longtime friend, Shaun E. Hill of Hill Farmstead Brewery in Greensboro Bend, VT.  At the risk of pimping too much, I'll go ahead and do so without restraint being that I'm uncensored on my own website.
As the Sales Rep for this fine product in the Philly area, I'm proud to be on site for the initial offerings of the brewery.  We'll have an IPA(Edward), a Double IPA(Abner), and perhaps a few other surprises.  Local food destination, Talula's Table will be on site with food for us to pair up with the deliciously fermented creations.
Shaun formally brewed for The Shed in Stowe, VT, where I first tried his beers at a Vermont beer fest and he let me try his first saison that he had brewed for them.  We kept in touch and conducted many trades since that initial meeting, which led to my sharing amongst my fellow local beer fanatics, who have been meeting for years for beer tastings...(Rate Beer's egajdzis, hopdog, TomDecapolis, and others from Rate Beer, and Beer Advocate).
Over 20 different Shed beers later, and a following from over 440 miles away, I continued trading with Shaun during his tenure at Trout River Brewing in Lyndonville, VT.  At this point, pilot brews were being developed for his true brainchild and passion - Hill Farmstead.
It wasn't long until Shaun ventured to the Scandinavian land of Denmark to brew for Nørrebro Bryghus.  Shaun was responsible for the 3 winning medals that Nørrebro recently took at The World Beer Cup.
Hill Farmstead beer will be available in the near future through Bella Vista Distribution in Philadelphia.  Contact me in the meantime.

Other than my long winded choice of words mentioned above, there are countless things to attend during Philly Beer Week.  You can check out the actual website for the different events, or the iphone app(you need the software version 3.1 to download it...I haven't plugged mine into a computer in quite some time, so I'm still running on 3.0) or you can check out what our friend, Bryan at The Brew Lounge did...for you spreadsheet fans (as I am), this spreadsheet of events offers a comprehensible listing that you can sort and figure out your personalized agenda.  Furthermore, he's created a listing of the Capone's events that are running during PBW...most would be happy to spend most of their time in East Norriton for the entire week with the ridiculous amount of events that Matt has planned.  I had placed most of those events on Beer Advocate before having to do "actual" work.  The ones I missed were kindly uploaded by local beer lover from BA & Rate Beer, corby112.

Sadly, I'll be missing a few days of events because I'm traveling for the first few days of PBW.  I expect each and every one of you to throw back a craft beer for me during my absence and send out good karma due to my heartfelt love of the Philly beer community.  I hope to see you all out and about when I am back in the saddle on Tuesday!
Posted by Mike at 3:34 PM No comments: