I arrived a tad late to the fest on Saturday, 8/22/10 because I punched in the address to the location at the golf course, instead of the actual Allentown location.  No matter, I arrived and was given some brief details, along with a glass to start checking out the treats on hand.


Up on the third floor was the Bourbon tasting section, where there was enough Bourbon to keep me well entertained, and feeling good.  I made my rounds, getting into Buffalo Trace, Eagle Rare 10 Year Single, Blanton's Single, Woodford Reserve, Maker's Mark 46, 4 Roses Single Barrel, 4 Roses Small Batch, And Wild Turkey Rye.  There were a few others on hand like Wild Turkey 101, Knob Creek, and Gentleman Jack but I've had them so many times, it almost seemed like a waste to even check them out at this juncture. 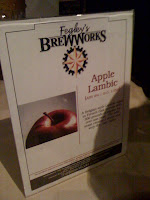 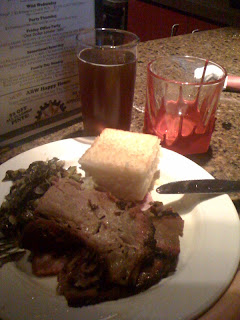 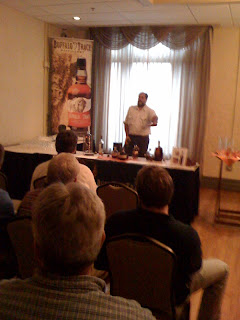 To the right, some guy named Bryson rambles on about distillation, etc.  He actually did a good job.  :)
I got to check out some samples from Easton Salsa Company and I liked both the salsas, and the hot sauces provided by Art Skrzenski.  I also spoke with Rick, the sales guy from Yards...while enjoying several glasses of the Bourbon Thomas Jefferson.  I relayed the story to him about how I pitched an idea to former Yards employee, John Rehm, about possibly doing some of the Ales of the Revolution in spirit soaked oak.  My idea was to call the limited series, Whiskey Rebellion...but alas, my friend left them shortly after the split into Philadelphia Brewing.
I got to chat with Brew Works Founder, Dick Fegley for a while.  We chatted about one of their latest beers, Arctic Alchemy.  A wonderful night of one of my favorite beverages, bourbon - by itself and with my other favorite beverage, beer! 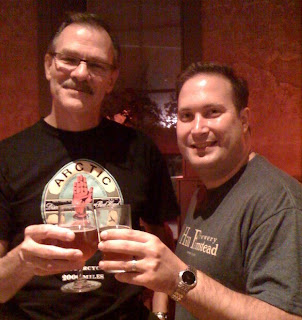