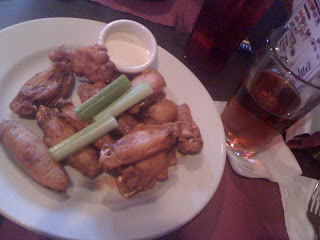 The texture is of a medium-crisped wing.  The meat is tender but the outside leaves a tad to be desired. - 2.5

The sauce is just OK.  I've been trying to keep the ratings on par with each other by getting either "hot", or "buffalo style".  The waitress did warn me that the hot wasn't very hot at all.  I'd agree with that.  In fact, I'm not sure how the mild ones could be any less aggressive than this.  - 2

The flavor was just too mellow for not only me but for the others in the party, as well.  Bar food is bar food but I've had better bar food wings. - 2.5

Edibility is decent.  Like I said before, these are really on the mild side, so there's nothing that's going to be over the top with this serving.  They are what they are.  Simple. - 3

Overall, these were a slight let down.  We decided to hit this place based on comments on one of the message boards about them having some of the best wings on the island.  They were alright but there's some other local stops that I would place higher on the totem pole. Service was friendly and bill was reasonable. -2.5

As for the beer, they don't have much in terms of a beer lover's ideal selection.  The best offering I found was the Sam Adams seasonal, which happened to be the Oktoberfest.