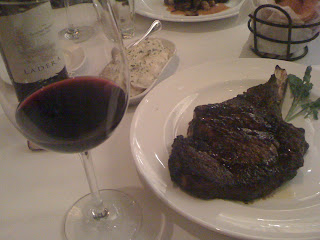 I had the privilege of being invited to a preview dinner at the new Capital Grille location in King of Prussia.  The opportunity to indulge in the legendary steaks, seafood, and wine selection was far too good to pass up.

After the warm, courteous greeting by the hostesses, I was ushered through the dining room, passing the large temperature controlled library of wines.  Glorious!  The atmosphere is warm, and inviting with dark wood, and an upscale "members only" vibe crossed with an exclusive lodge adorned by mounted game at various points in the restaurant.

On to the important point -- the food.  Appetizers included Lobster and Crab Cakes, which were delicious and packed with succulent seafood.  The other appetizer, which my waiter insisted I try, was the Pan-Fried Calamari with Hot Cherry Peppers.  Outstanding stuff.  The fresh, tender rings of fried squid had a nice crispy exterior, along with just enough heat from the cherry peppers to draw out the light, refreshing flavors of the crispy calamari.  If you happen to dine during dinner at the KOP location before Thanksgiving, you'll be treated to a complimentary calamari appetizer!

The main courses soon arrived, which tasted as good as they appeared.  Pictured above was the Porcini Rubbed Delmonico with 12-Year Aged Balsamic.  This steak was prepared medium-rare and was tender enough for the knife to quickly slice through like warmed butter.  The earthiness and wood like undertones of the porcini added a nice compliment to this steak.  The aged balsamic acted much like a port reduction would, adding a layer of sweetness and richness to the full flavors of the the Delmonico. 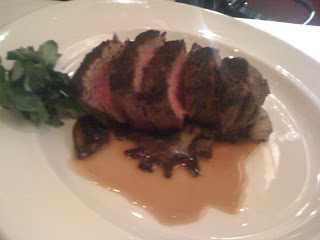 The other main course was Sliced Fillet with Cipollini Onions and Wild Mushrooms.  Again, the steak was prepared perfectly and melted in the mouth.  The sauce was absolutely divine...an au jus with fig essence, which had a nice fruity, and toffee flavor that partnered this meat superbly.  The sides ordered were Mashed Potatoes and Vidalia Onion Rings, which had a crunchy, fried outer surface ala Panko crumbs.

All meals went well with the choice of wine, an '06 bottle of Ladera Cabernet which had nuances of ripe berries, jam, vanilla, raisins, caramel, and currants.

The dessert was comprised of a ricotta cheesecake with a cooked sugar top, and a cup of mixed berries with a Grand Marnier cream sauce.  A nice way to end the meal. 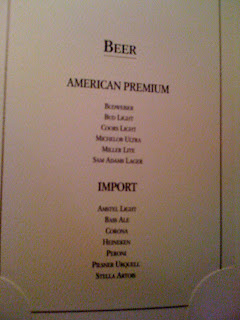 I decided to check out the spacious bar area before leaving.  Lots of top shelf liquors in sight with a menu of house made concoctions that sounded tempting.  I happened to check out the beer menu, while I was there...
The only thing that could've made this slightly better would be options for beer.  Guys, my services are openly being offered here!  How about a nice saison, or witbier for some of the seafood offerings, or perhaps a hearty Imperial Stout, an IPA with the chicken, or Aged Barleywine to go with some of the steaks?  I understand that this a huge wine destination - I get it.  Beer has caught up though, and in this day and age, it's always nice to have another option for another potential group of potential diners.

Other than that, continue to rock on!
The Capital Grill K.O.P. officially opens tomorrow, 11/8.
I'm looking forward to a few more repeat visits.