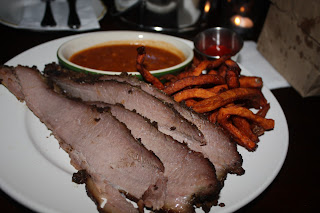 I watched with a tear in my eye as they removed the old Khyber sign from in front of the old standby establishment where I had seen many a punk rock, hardcore, and indie pop show over the years.  The instant thought of updated tap lines, food, and a dining room quickly made my long time memories escape so I could indulge in the highly anticipated metamorphosis of the legendary Old City beer spot. 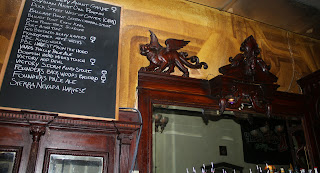 To my delight, the new ownership and management team of the location decided to keep the name under the known name of Khyber/Khyber Pass for the sake of everyone already knowing the establishment as a "must-stop" beer bar while in Old City Philly.  The legendary, rotating beer taps?  Bigger and better.  The KPP is now boasting 20 quality taps, along with selections in bottles.  The new interior paint behind the bar looks great while maintaining that terrific looking mantle piece that always gave this spot a rustic feel. 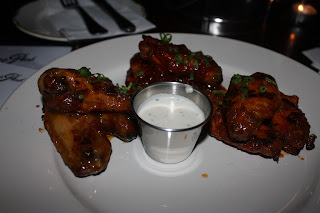 I was graced with an unusual snack before the first part of my meal arrived...bacon fat popcorn!  I've never had anything like it but I must say, that this is oh, so wrong but so addictive at the same time.  I opted for the chicken wing trio of Buffalo, Chipotle-Bourbon Barbecue, and Honey-Habanero.  The standout for me was the H-H's, which were a nice blend of heat and sweetness. 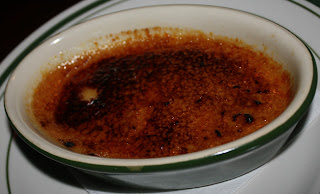 For the entree, I ordered the Brisket with sweet potato fries and baked beans.  Very delicious dinner.  The brisket was tender and melted when cut with just enough smokey flavor to entice the taste buds.  For dessert, I went straight for  the Maple Bourbon Creme Brulee, which was fantastic.  I've had some real let downs in my day but this one was the real deal.  I wish I had saved room for the Bread Pudding dessert they had available but that will only keep me waiting for the next visit to attempt that finish. 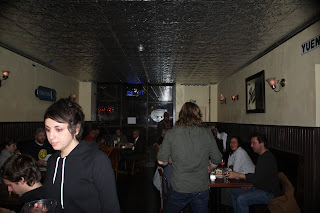 The "new" dining room that used to be the spot for the music venues has undergone the biggest transformation.  Long gone is the cavernous space with the concrete floor, stage up against the window that was once covered in cardboard and newspaper.  A fresh paint job, with hardwood floors, and wall sconces adorn the space that had been used for cranking out deafening tunes. 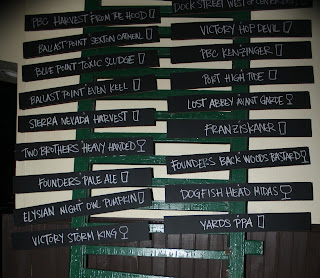 The beers are plentiful and this new menu is really great.  This should not only attract the beer fans of old with greater enthusiasm; the foodies will be flocking, as well.    I got a chance to try Ballast Point Even Keel at the recommendation of Bella Vista rep, Paul, who also happens to be an alum of the old Khyber.
The Khyber Pass Pub's website
Posted by Mike at 4:52 PM