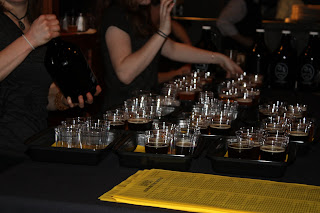 On January 29th, Iron Hill of West Chester hosted it's annual Belgium Comes to West Chester.  This event highlights local and other "friendly" breweries' Belgian inspired beers.  There were 22 beers available plus the current offerings of Iron Hill.
From various Iron Hill locations, there were offerings of a Saison, Quad, and beers that have been dosed with blends of Brettanomyces(wild yeast) and bacteria.  These "funky" beers included the Flemish Red, Sour Dubbel, and Wee Funky.

So, was there a winner of the bunch?  Not that it's meant to be a competition but if I had to choose just one, it would've been Iron Hill's Wee Funky, which was brewed at the Media location.  The day also yielded the return of Yards Brewing's Trubbel de Yards, which I haven't seen, or tasted in years.  A tiny bit different than how I remember but a nice welcome back as far as I'm concerned.
As for the food specials...was hoping for more of a Belgian inspired menu but they always have mussels and frites on the menu.  I opted for the Onion au Gratin soup, which is one of the better interpretations found in the area.  I followed up with the Corned Beef sandwich, which came on a sub roll.  Tasty, salty, and filling.  A good choice to soak up all that Belgian inspired liquid.

I did run into several members of the beer community found on Beer Advocate and Ratebeer.  There were several local homebrewers in attendance.  I also saw many of the brewers responsible for these creations.  I even saw fellow food/beer blogger, Amy, who seemed to be out and about in gregarious fashion. 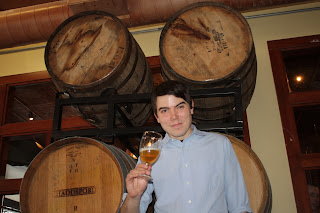 While I was there, I got to check in with Assistant Brewer, Jean Broillet.  He gave me a sample of the India  Black Ale which was roasty, citrusy, balanced, and packed with a hop punch that doesn't overwhelm the palate.  I was also given a sneak peak of Kaldi Kreme, which is an Imperial Milk Stout infused with locally roasted coffee.  Put down that bottle of Peche Mortel and run over to get this amazing treat before it's all gone!
I probed about Jean's upcoming project, Tired Hands Brewing.  He's got a 6 bbl system secured that will be the tools for producing rustic, Farmhouse inspired Saisons, Bier de Gardes, and other specialty French/Belgian Ales, along with American hop-centric Ales.  To me, it's an easy sell.  Jean understands the world of the Farmhouse Ale and has proven that he knows what he's doing.  He's a fan of maturing these type of beers on oak too, which adds yet another layer of complexity for the senses to unravel.  The fact that he's going to specialize in these types of beers(among others in the pipeline) is a draw that will get me out to the proposed Tired Hands facility...wherever they settle.  I'm thinking if they settle anywhere between 252 and City Ave is ok by me!
Posted by Mike at 12:46 PM 3 comments: