Philadelphia (King of Prussia to be exact) hosted the first stop of Cadillac's Culinary Challenge 2011.  This event took place over a 2-day period -- May 21st & May 22nd.

The challenge pitted two chefs against each other in a cook-off with the winner decided by a panel, and/or crowd participation.  The object?  Win over the crowd by making the predetermined dish the favorite of the group.  Our chefs?  Chef David Burke (on the left) known for being the recipient of several culinary awards, a restaurateur, and gracing television shows such as Iron Chef America.  His opponent?  Our hometown favorite chef of City Tavern fame, Chef Walter Staib, who is a multi-award winner and culinary journeyman in his own right.

As a side note, Chef Walter blends two of my favorite subjects, food and American history.  He tackles both worlds exceptionally well as profiled on the PBS program, A Taste of History, and at his restaurant located in historic Old City.  As most of you are aware, this foodie/beer geek is a huge follower of the local beer scene.  The mere mention of Chef Walter wouldn't be complete without the nod to his bringing us The Ales of the Revolution through Yards Brewing.  Washington's Tavern Porter is one of my favorites of the style.  I've pitched the idea to various members of Yards' staff over the years of aging all of these beers in bourbon(or another spirit) barrels ala The Whiskey Rebellion.  Maybe some day. 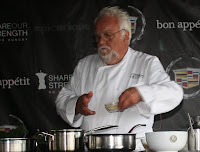 Chef Walter prepares his dish, Chicken Napoleon a la Jefferson.  This dish was an Angel Hair Pasta Frittata topped with wilted dandelion greens and Chicken Doree.  This was a very interesting dish.  I wouldn't have thought to have pasta come in the form of a frittata but it worked.  The dandelion greens were a nice touch with the earthy, sweet and bitter flavors melding with the savory chicken.  Delicious!

Prior to the event, Staib taunted Burke by saying, "You're in Philadelphia now. We're going to teach you a thing, or two." Both completed dishes would soon tell the tale. In any case, I was taught that I enjoy pasta with eggs. To the left is the Chicken Napoleon a la Jefferson prepared by Chef Walter Staib.  This dish was inspired by favorite foods and ingredients of Thomas Jefferson. 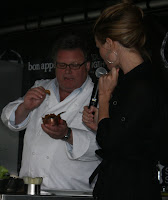 Chef David Burke shows off some of the sliced Portobello mushrooms, which would become the mushroom chips to accompany the open faced Cheese Steak made from 55-day dry-aged beef, aged provolone, and french fried onions.  The beef alone was worthy of an applause.  I was pleased to have tried it.  According to Burke, his group owns the flow from farm to plate with this beef, as they own the cattle.  This was a nice treat and if given another opportunity to experience a greater portion of this finely aged beef with either a nice red wine, or an appropriate beer, I would do so in a heartbeat with the cash in hand! 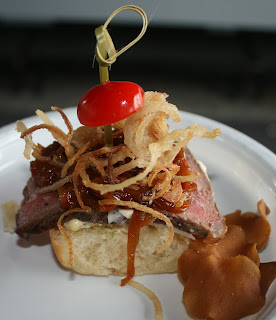 So, who was the winner of this event?  I believed both dishes were very well done.  I would've been pleased with either dish but that beef simply won me over.  There was a tangy bbq and fig-like sauce atop the beef that held those crunchy onions on...that kind of did it for me too.  The tasting panel outnumbered me and one other voter in favor of Chef Walter's dish.  Home court advantage?  Maybe.  Chef Walter's dish was worthy of the win and I look forward to getting a chance to revisit his wonderful meals at The City Tavern.
Be sure to check out other stops across the national, 13 stop tour on the facebook page, or go to the homepage of  Cadillac's Culinary Challenge Tour.
Posted by Mike at 11:44 PM