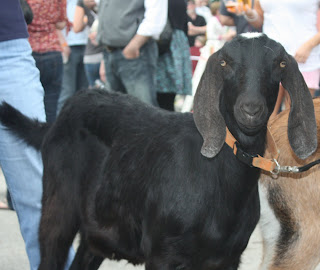 A crowd of thousands converged upon Phoenixville yesterday in joyful celebration of the annual Bock Festival & Goat Race held at the Sly Fox Brewhouse.  So, what's all the hubbub about goats, and beers, you ask?
Bock in German means "goat", or ram.  So, what the hell does that have to do with beer?  It is thought that "bock" was a spin from the strong beers brewed in Einbeck, Germany.  The southern German accent sounded like "Ein-bock".

Anyway...
Lots of German style beers on tap, including Hefeweizen, Helles, Pilsner, Doppelbock, Eisbocks, and of course Maibock, which is the "May" Bock to celebrate spring.  Plenty of grub, including soft pretzels, and German sausages.
These two handsome fellows here give each other the stare before race time.  They thought about ramming skulls, and tangling horns before the owners reeled them in and got them set to run. 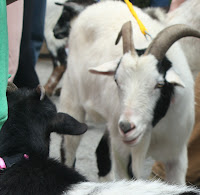 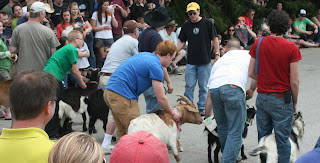 The Emil Schanta Band performs Oom-Pah tunes with brewmaster, Brian O'Reilly watching the goats line up for the next heat of the race.  Zicke Zacke, Zicke Zacke, Hoi, Hoi, Hoi! 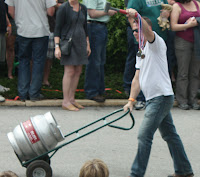 Sly Fox's Corey Reid wheels out the first keg of the Maibock to be named after the winner (ended up being Peggy Maibock).  This particular keg (a firkin) is tapped by using a portable spigot via insertion of a mallet.  The beer is then poured by gravity.  Alle natürliche bier...yummm. 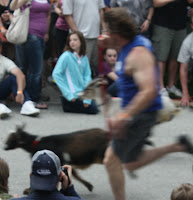 Go, goats, go!  These cute critters ran their fuzzy little hearts out.  No running for me.  I stuck to the beer.  This is the reason I look forward to the start of May every year.  Ein prosit zum Sly Fox!
Sly Fox's Website