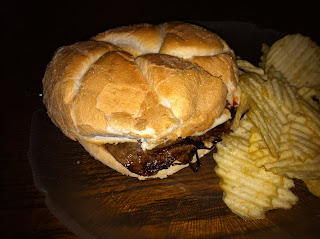 McNally's Tavern is home of the Schmitter, a sort of hybrid cheesesteak. The Schmitter is made up of slices of steak, cooked salami, fried onions, cheese, tomatoes and Schmitter sauce (similar to russian dressing) on a kaiser bun. This is truly a great sandwich. One of the best in Philadelphia.

If you have ever been to Citizens Bank Park, chances are you have seen or heard about this sandwich. For those of you that have had the sandwich at the ballpark, do yourself a favor and get the original at McNally's Tavern on Germantown Ave.

P.S. Most people think the Schmitter was named after Phillies legend Mike Schmidt, but it's actually named for a regular that drank Schmidt's beer and ordered his cheesesteak that way. Go figure.

I have ordered Italian Hoagies all over PA and NJ. This is by far the worst hoagie that I have had in my life. They skimped out on the meat, which by the way tasted like a bologna sandwich and the roll was stale. My co-workers got the Ceasar's salad and the lettuce was old and wilted. We also got the famous "Smitter" which tastes good if you like to eat old shoes. IF the rating was 1-5, I would rate it at -5.

Well Stu, I just gotta comment on your "comment": You obviously did not visit McNallys in Chestnut Hill. I don't where you might have run into such an experience but it wasn't here, I can assure you. Then I thought this must be someone using your name to make the feeble attempt to discredit the McNally family and their 90+% approval ratings across the internet over the , well since the internet was invented! Either way your comment is purely evil fiction. But we love you anyway, no matter what is driving your demons! ~jmp